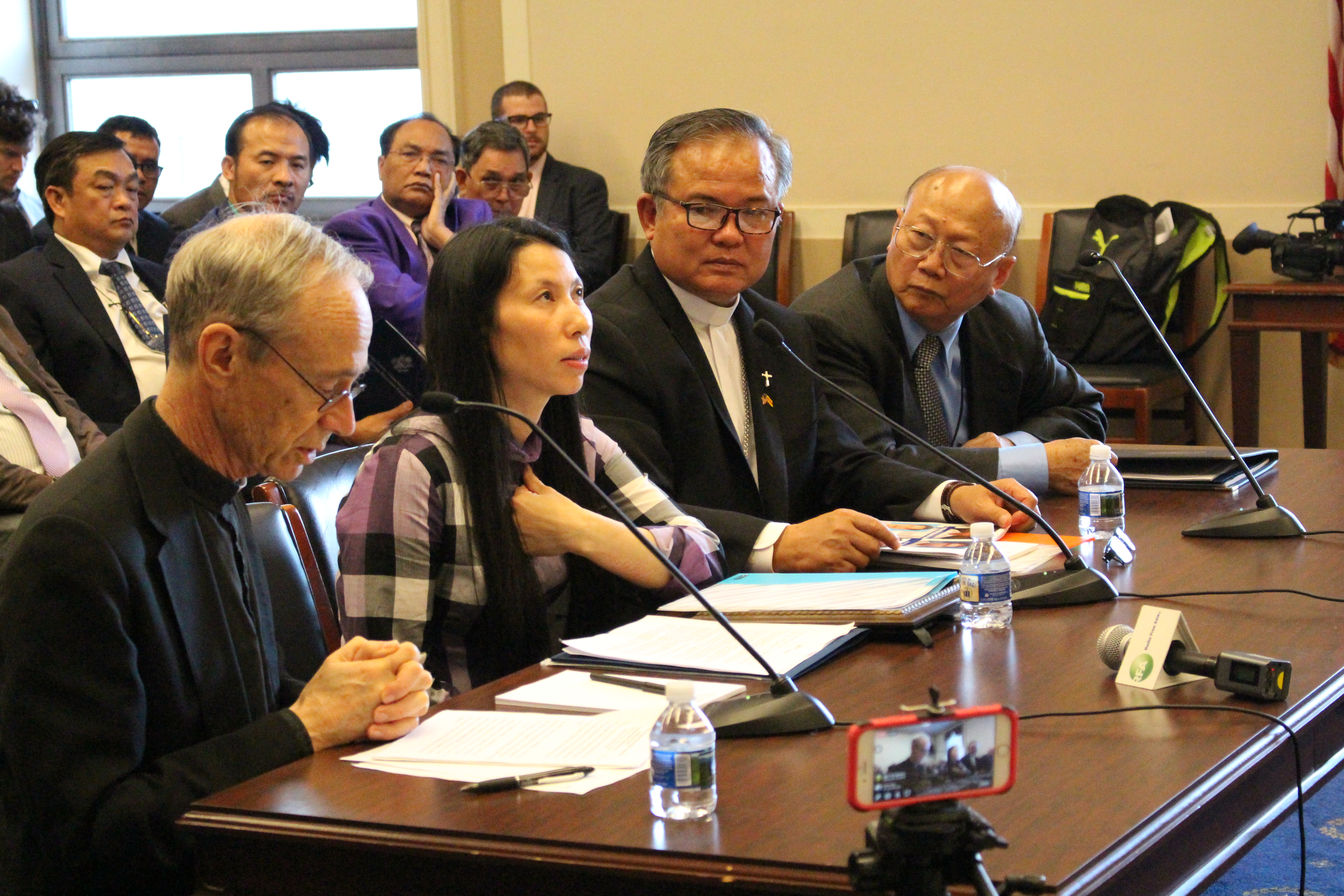 Good afternoon. I want to thank the Vietnam Caucus and the Tom Lantos Human Rights Commission for organizing this briefing. My special thanks to Representatives Lowenthal, Correa, Lofgren and Royce and other members of the Caucus and Commission for their leadership in support of human rights and religious freedom in Vietnam.

I am Father Thomas Reese, a Commissioner on the U.S. Commission on International Religious Freedom. Commissioner Jackie Wolcott, who had planned to be with us today, has taken sick. She asked me to convey to you her deepest regrets.

I join Commissioner Wolcott in applauding the Caucus and Commission members for their unflagging efforts on behalf of prisoners of conscience. One of these prisoners, now a former prisoner I am so pleased to say, is here with us today – and in freedom, Pastor Nguyen Cong Chinh. I also want to welcome his brave wife Tran Thi Hong, who along with the Pastor and their five children, now are living in California.

Pastor and Mrs. Hong, I honor you for your resiliency under the cruel conditions under which you lived and being forced to leave your country. You inspire all of us to advocate for those who are imprisoned for their religious beliefs, activities, and advocacy. On a personal note, I am deeply relieved by your release and honored to be here with you and your wife. I thank everyone who helped make today possible—and every day that you are in freedom hereafter.

Both Representative Lowenthal and Commissioner Wolcott worked on your behalf: the Representative as part of the Tom Lantos Commission’s Defending Freedoms Project, and Commissioner Wolcott, as part of USCIRF’s Religious Prisoners of Conscience Project. The goal of both efforts is to advocate to free prisoners of conscience and hold culpable governments accountable. USCIRF also long has expressed concerns about the status of religious freedom in Vietnam. I was part of a USCIRF delegation who went to Vietnam in August 2015 to see firsthand the conditions there for religious freedom.

Others share USCIRF’s concerns and have worked tirelessly in support of human rights and religious freedom in Vietnam. Along with the Vietnam Caucus and the Lantos Commission, I want to highlight the work of members of brave local organizations in Vietnam who worked on behalf of Pastor Chinh and Mrs. Hong. These include the Vietnam Coalition Against Torture, the Association for Support of Victims of Torture, and a multi-faith roundtable. I also must mention the tireless work of international organizations like Boat People SOS and others.

Pastor Chinh was a prisoner in Vietnam, but he committed no crime and should never have been imprisoned. What he did was minister to his Christian community and peacefully criticize the Vietnam government’s restrictions on preaching and religious expression. For that, he suffered in prison, in ill health, while the Vietnamese authorities harassed his family. Government officials subjected Mrs. Hong to frequent government surveillance and beatings, and violently, and ultimately unsuccessfully, tried to prevent her from meeting with then-U.S. Ambassador-at-Large for International Religious Freedom David Saperstein, even abducting and again beating her in their failed attempt.

Sadly, the Vietnamese government’s treatment of Pastor Chinh and Mrs. Hong is symptomatic of the grave status of the freedom of religion or belief in Vietnam.

Nearly 11 years ago, the State Department wrongly removed Vietnam from its list of CPCs – Countries of Particular Concern. CPC designated countries are among the worst violators of religious freedom in the world. USCIRF disagreed then with the State Department and we disagree now.

The State Department is mandated to again issue its annual CPC designations by November 13, and we urge both the designation of Vietnam as a CPC, and actions be taken commensurate with this designation. We also urge you to join us in this effort.

USCIRF believes that Vietnam deserves to be a CPC unless and until the government improves religious freedom conditions and respects international human rights standards. To that end, we will watch how the government, among other actions, implements the new Law on Belief and Religion.

This law isn’t perfect, and it is a far cry from international standards. It started out as very bad, in my opinion, but what’s key is that the Vietnamese government engaged with the U.S., took input from religious organizations and guidance from international experts, and seemed willing to address the country’s religious freedom challenges.

However, our optimism has been tempered by reports that deeply concern us about how the government intends to implement the law and penalize individuals and organizations it deems to be in violation.

Also deeply concerning are the countless prisoners of conscience who remain in Vietnamese jails, many of whom are tortured, and the countless other religious believers and human rights advocates, and their family members, whom the government harasses and seeks to intimidate. And then there are the local authorities and thugs who carry out with impunity brutal human rights abuses against vulnerable religious groups including: Khmer Krom Buddhists, independent Hoa Hao Buddhists and Cao Dai followers, Montagnard Christians, and others.

What can the U.S. government do? In addition to re-designating Vietnam as a CPC, and raising concerns about the implementation of the Law on Belief and Religion, I urge that U.S. officials consistently raise prisoner of conscience cases and request to meet with these prisoners and their family members when they are on CODELS to Vietnam.

I also urge the U.S. government to employ tools available under the Global Magnitsky Human Rights Accountability Act, the Frank R. Wolf Religious Freedom Act, and the International Religious Freedom Act. These Acts and other existing tools will help hold accountable Vietnamese officials and government agencies who have participated in, are responsible for, or have tolerated human rights abuses, including severe violations of freedom of religion or belief.

The U.S. government also must continue to regularly visit remote, rural areas where violations of freedom of religion or belief are likely to occur.

The U.S. can and should engage Vietnam on religious freedom issues and other human rights, and urge our international partners to do the same. With the example of Pastor Chinh and Tran Thi Hong before us, we must continue our efforts until there is freedom in Vietnam.