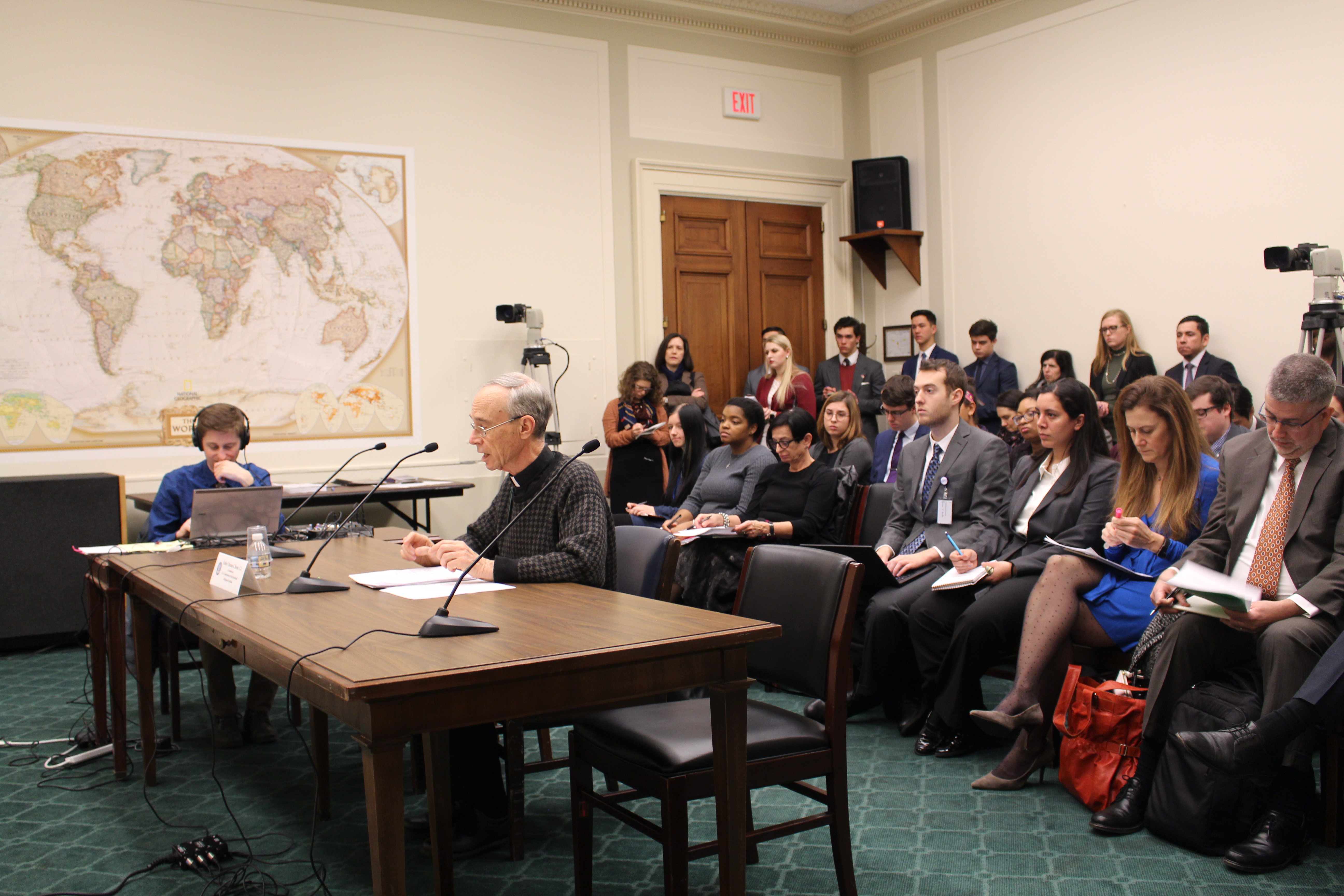 In his testimony, Commissioner Reese discussed the causes behind mass atrocities and recommendations for US policies to prevent such atrocities in the future.

Thanks to the Commission’s Co-Chairs, Representatives McGovern and Hultgren, for holding today’s hearing. I am Father Thomas J. Reese a USCIRF Commissioner. I request that my written testimony be submitted for the record. Today, I will make several points which I address more fully in my written testimony.

First, mass atrocity prevention should be a top U.S. foreign policy priority. Mass atrocities are large scale and systematic violence, deliberately inflicted against civilians. They include genocide, crimes against humanity, war crimes, and ethnic cleansing. Not only are millions of lives at risk, but mass atrocities destabilize nations and regions and challenge U.S. interests worldwide.

Using the term “mass atrocities” usefully broadens the discussion beyond genocide. Many focus exclusively on genocide as it is a powerful word. They believe that invoking “genocide” would bring pressure on the world community to act. Yet, a genocide declaration imposes no new obligations.

Second, effective solutions are difficult to attain. Situations in which atrocities occur are complex. The diversity of past atrocities makes it challenging to predict future atrocities and propose solutions. Also, competing national and international interests can sap the political will to act.

Third, we cannot become bystanders on this most important issue of our time. Three examples make this case:

1. A massive crisis is unfolding in Burma and Bangladesh. In Burma, the military has killed, looted, disappeared, and raped Rohingya Muslims. More than 750,000 have fled to Bangladesh, and live in squalid refugee camps. U.S. and United Nation’s officials characterize the abuses as ethnic cleansing.

2. The Islamic State of Iraq and Syria (ISIS) has committed genocide against religious minorities, Yazidis, Christians, and Shi’a Muslims in Iraq and Syria, and crimes against humanity against others.

3. In North Korea, the regime has committed crimes against humanity. It tortures, imprisons, and executes anyone, including religious believers, whom it views as threats to the power of the leader. These mass atrocities take place in the absence of an armed conflict.

Fourth, the U.S. government must take every opportunity to address these atrocities. My written testimony includes recommendations to that end. It also underscores the importance to address conflicts before they become mass atrocities. I will highlight two examples:

1. The Chinese government’s actions against Uighur Muslims. These include: forcing Uighurs into so-called “reeducation camps” and disappearing others; using GPS systems and DNA sampling to track them; and dramatically restricting their religious activity. Uighur prisoners receive unfair trials and harsh prison treatment. Uighur scholar Ilham Tohti is serving a life sentence after being found guilty in 2014 of separatism. Gulmira Imin is serving a life sentence for her alleged role organizing protests in July 2009. USCIRF is advocating on her behalf as part of its Religious Prisoners of Conscience Project.

At least 152 Tibetans have self-immolated since February 2009.

The government accuses the Dalai Lama of “splittism” and tortures monks and nuns who refuse to denounce him or pledge loyalty to Beijing. Party cadres oversee so-called “patriotic education” classes at the religious and educational institute of Larung Gar. The government also imprisons and disappears prisoners of conscience, including the Tibetan language advocate Tashi Wangchuk. He faces up to 15 years in prison. The government disappeared the Panchen Lama. USCIRF advocates for him as part of its prisoner’s project. Representative McGovern is working on his behalf in the Lantos Commission’s Defending Freedoms Project.

My fifth point, reinforced by these and other examples, is that members of religious minority communities are rich targets for mass atrocity perpetrators. Thus, their protection, and promoting their religious freedom, should be key factors in mass atrocity prevention.

My sixth point is that confronting mass atrocities is challenging due to. Insufficient political will, compassion fatigue, perceived competing priorities, and the lack of consensus about when, how, and under what circumstances prevention should be pursued.

My last point is that much work needs to be done. My testimony includes recommendations to Congress such as:

USCIRF also strongly supports the use of targeted sanctions like the Global Magnitsky Act. These and other sanctions can be effective tools, partly because of the impact of public shaming.

Finally, it is important to adopt an all-of-government approach to promoting religious freedom and preventing mass atrocities. The responsibility to address this issue is fragmented. Multiple Congressional committees have jurisdiction, as do several Executive Branch departments and sections. And the government needs new tools to better address these atrocities. I hope that future hearings will explore the issues I and my fellow panelists have raised.

I applaud the Commission for drawing attention to mass atrocity prevention. Lives are at stake.