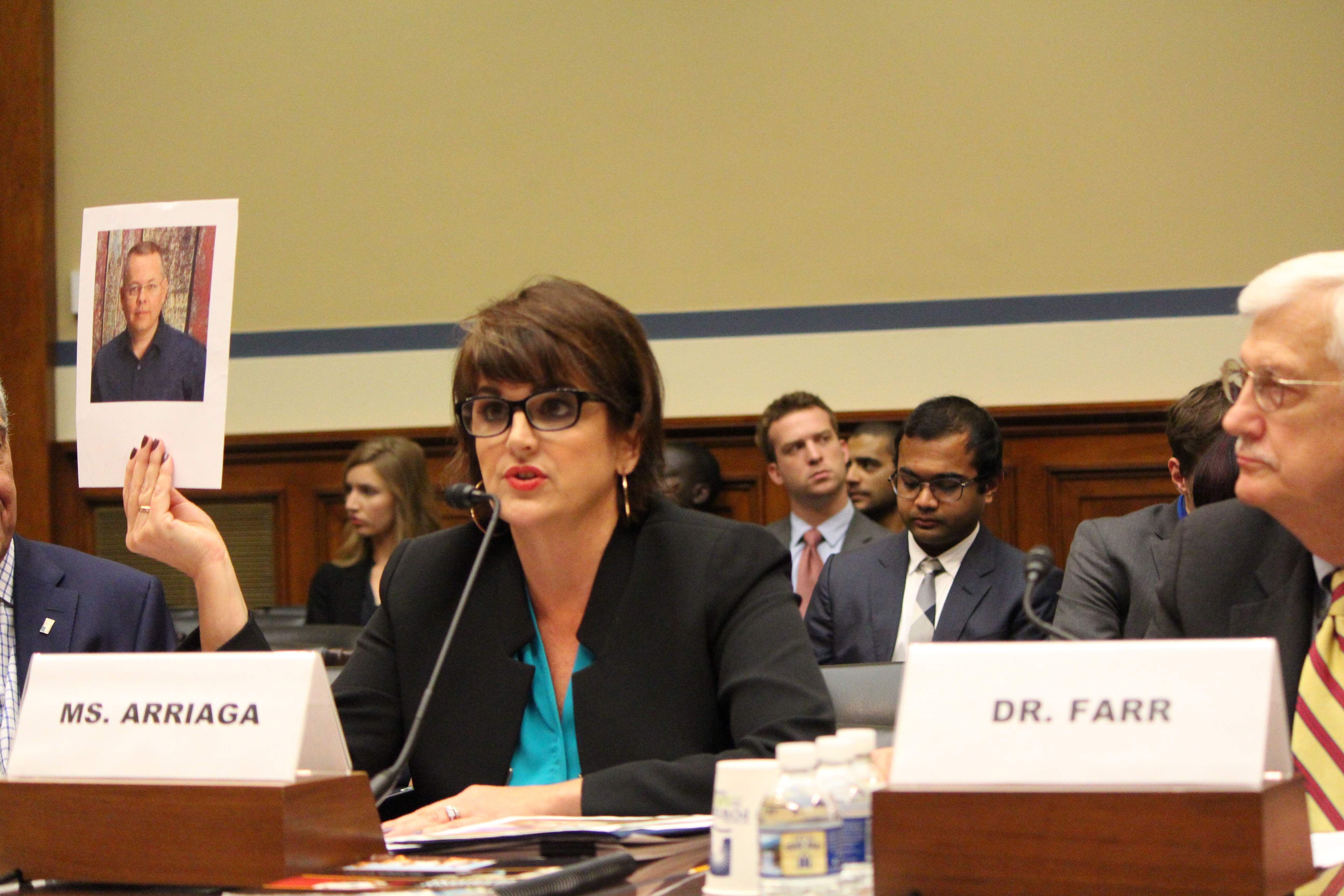 Kristina Arriaga, the Vice Chairwoman of the U.S. Commission on International Religious Freedom (USCIRF), testified before the National Security Subcommittee of the House Oversight and Government Reform Committee on October 11, 2017.

National Security Subcommittee of the
House Committee on Oversight and Government Reform
October 11, 2017

My name is Kristina Arriaga, Vice Chairwoman of USCIRF. Thank you for the opportunity to testify. I request that my written testimony be submitted for the record.

Today, I offer some observations which I explore more fully in my written testimony:

1.       The U.S. government must factor into its foreign policy freedom of religion or belief, a foundational human right, a source of peace, stability and economic vitality, and a key factor in countries worldwide.  We ignore religious freedom violations at our peril, must address challenges proactively and reactively, and connect the dots because these violations have security implications for the United States.  For example, those whose religious freedom has been violated can become susceptible to extremist indoctrination, and governments that commit violations or allow them to occur with impunity often sow the seeds of their own instability.

Thankfully, many are beginning to understand that if the U.S. government doesn’t get religious freedom right, it won’t get U.S. policy right. But this understanding needs to be reinforced and reflected in both words and deeds.

2.      Some governments view religion as an alternate source of authority which they must control.  Governments seek this control by:

However, by exercising control in these ways, governments in Russia, Syria and Iraq, Saudi Arabia and Pakistan, for example, create more instability, not enhanced authority

3.      Non-state actors, especially in failed or failing states, are among the primary perpetrators of egregious religious freedom violations, and the source of instability, in countries including the Central African Republic, Syria and Iraq, Nigeria, Afghanistan, and Pakistan.

4.      The U.S. government has some of the tools to address religious freedom violations, including the 1998 IRFA, the 2016 Frank R. Wolf International Religious Freedom Act, and the Global Magnitsky Act.

However, we must have the political will to use these tools, and that is where we can fall short.

Congress plays an indispensable role including by holding hearings, passing needed legislation and appropriating ample funding, exercising oversight, focusing on accountability, continually creating and refining the tools needed to address challenges, including accountability for genocide and crimes against humanity, using your bully pulpits to highlight violations, and advocating for those persecuted and/or detained.

I will end by focusing on two issues dear to my heart: religious prisoners of conscience and women and religious freedom.

We must highlight the cases of religious prisoners of conscience unjustly imprisoned for their religious beliefs, activities, and advocacy and the impact of unjust laws and practices.  Members can support prisoners through the Tom Lantos Commission’s Defending Freedoms Project, launched in conjunction with USCIRF and Amnesty International USA. I hope all Members will join this effort. To do our part, Commissioners each are advocating for a prisoner as part of USCIRF’s Religious Prisoners of Conscience Project. I chose Fariba Kamalabadi, whom the Iranian government has detained for being a Baha’i.

I would be remiss if I did not mention that during a USCIRF delegation visit to Turkey, Commissioner Sandra Jolley and I drove to the remote prison of Kiriklar to meet with Pastor Andrew Brunson, whom the Turkish government has imprisoned on fabricated charges. The Turkish government must release him immediately.

Finally, building lasting peace and security requires the participation of women.  Especially during conflicts, women often are targeted for violence and discrimination, with religion used to disempower women.

In fact, it is a betrayal of the very foundations of freedom of religion or belief whenever it is misused to justify inexcusable and harmful practices such as female genital mutilation, child brides, and forced conversions.

My written testimony ended by quoting Martin Luther King. I here would like to quote Yogi Berra who said “If you come to a fork in the road, take it.”  The United States must commit to travel the road of advocating for international religious freedom with determination, passion, and commitment.