USCIRF Releases New Report: A Right for All: Freedom of Religion or Belief in ASEAN 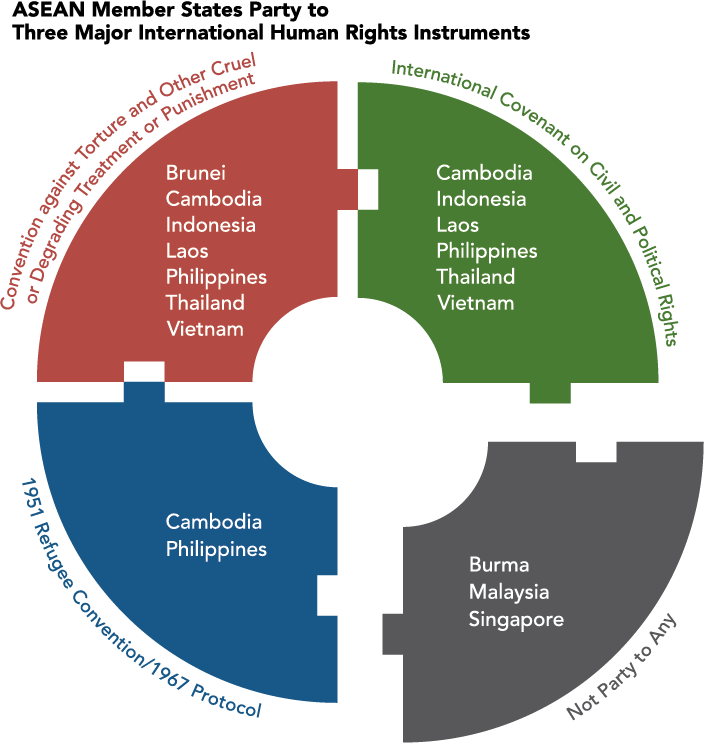 A Right for All:  Freedom of Religion or Belief in ASEAN

WASHINGTON, DC – Today, the U.S. Commission on International Religious Freedom (USCIRF) released A Right for All: Freedom of Religion or Belief in ASEAN, a report documenting the state of this freedom in the 10 Member States of the Association of Southeast Asian Nations (ASEAN).  The study examines ASEAN’s and the Member States’ approaches to this fundamental right, praising the fact that “ASEAN has achieved some level of cooperation across such diversity” and noting where improvement is needed.

“ASEAN has demonstrated a clear willingness to become an economic, political, and cultural force in the region and the world,” said USCIRF Chairman Daniel Mark.  He added, however, that “ASEAN and the Member States have a responsibility to uphold international human rights standards, including by protecting freedom of religion or belief and related human rights.”

The report’s author, Tina Mufford, USCIRF Senior Analyst for East Asia, found that ASEAN’s approach to human rights has been shaped by two competing interests: Member States’ desire to integrate as a bloc and their historical commitment to independence and non-interference in each other’s affairs.  Citing ASEAN’s 50th anniversary and 40 years of U.S. engagement, Ms. Mufford said that the United States is uniquely positioned to press Member States to uphold international human rights standards.  “Doing so,” she said, “would send a strong and clear signal about U.S. priorities in the region.”

Each ASEAN nation faces crosscutting challenges that transcend borders, such as refugees, terrorism, and ultra-nationalism.  Common religious freedom violations include the detention of prisoners of conscience and the use of blasphemy laws and other similar measures.

“USCIRF calls upon ASEAN to protect the religious freedom of all,” said Chairman Mark.  “Burma’s Rohingya crisis is a prime example of where ASEAN should step up to its international commitments and work with its Member States to prevent ongoing violations and help protect and aid this vulnerable population.”  Read USCIRF’s recent press release about the Rohingya crisis here.