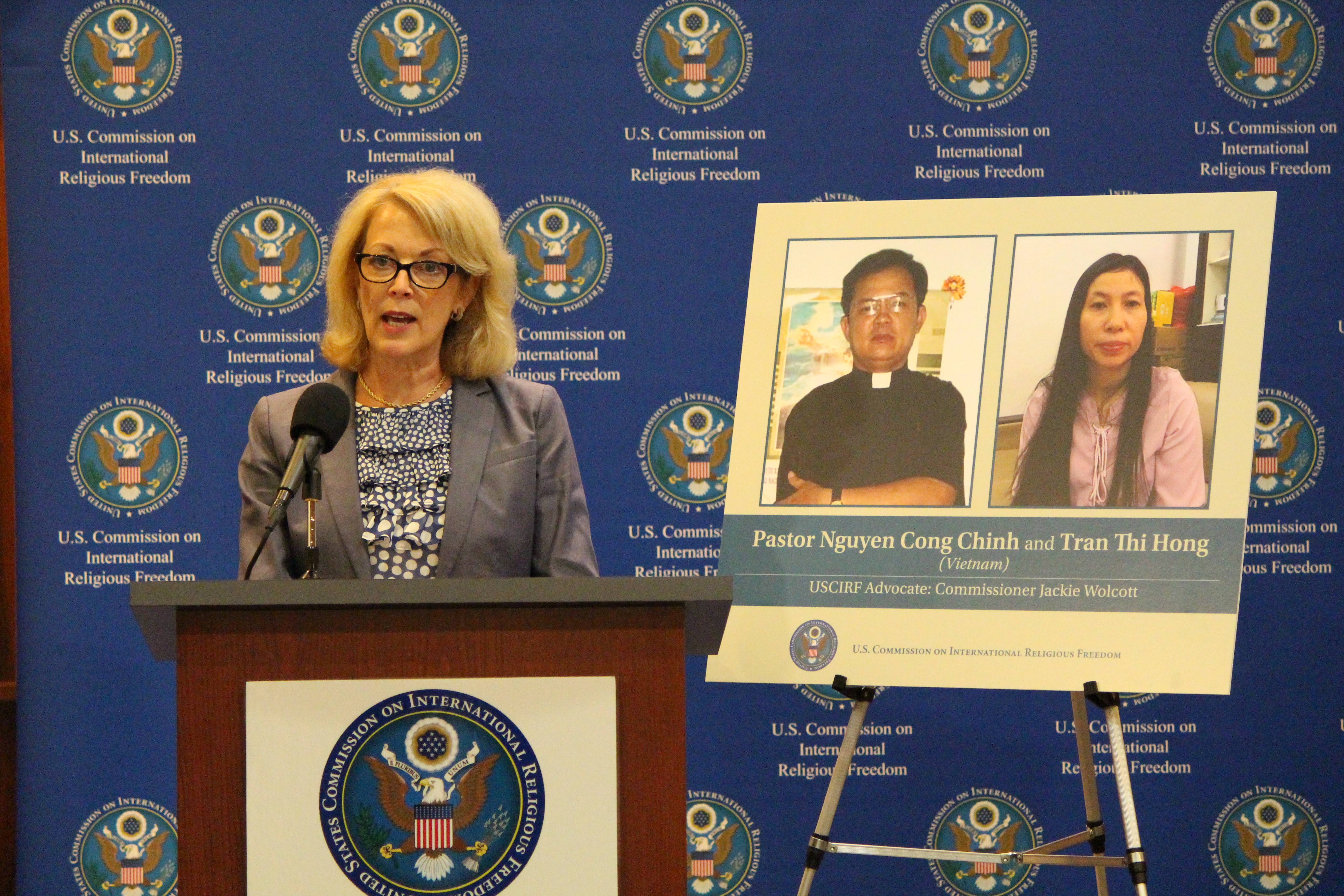 Commissioner Jackie Wolcott speaks in support of Pastor Chinh and his wife.

WASHINGTON, D.C. – The U.S. Commission on International Religious Freedom (USCIRF) expressed relief that the Vietnamese government has released religious prisoner of conscience Pastor Nguyen Cong Chinh and allowed him, his wife Tran Thi Hong, and their five children to leave the country. Pastor Chinh was sentenced in 2012 to 11 years’ imprisonment and endured solitary confinement and torture in prison. The family has arrived in the United States after the U.S. government granted Pastor Chinh humanitarian parole.

“The Vietnamese government finally has done the right thing by releasing Pastor Chinh from prison.  We welcome his admission, along with his family, to the United States.  The reality is that he should not have been imprisoned in the first place for simply practicing his faith,” said USCIRF Commissioner Jackie Wolcott, who has advocated on behalf of the pastor. “Pastor Chinh was falsely charged and imprisoned and treated cruelly, as are countless other religious believers and human rights activists who continue to be harassed, detained, and tortured in Vietnam.”

Commissioner Wolcott took up the case of Pastor Chinh and his wife as part of USCIRF’s Religious Prisoners of Conscience Project. Through this project, Commissioners work for the release of individuals who have been imprisoned for their religious beliefs, practices, advocacy, or identity and the laws and practices that led to their imprisonment.

USCIRF commends the brave efforts of Pastor Chinh’s wife, Tran Thi Hong, who worked tirelessly on behalf of her husband. Vietnamese authorities frequently harassed and surveilled Mrs. Hong, including beating her for meeting with then U.S. Ambassador-at-Large for International Religious Freedom David Saperstein about her husband’s case.

USCIRF has recommended since 2002 that the State Department designate Vietnam as a “country of particular concern,” or CPC, for its systematic, ongoing, and egregious violations of religious freedom. Through law, policy, and practice, the Vietnamese government perpetrates or tolerates serious religious freedom abuses, particularly against unregistered religious organizations and in rural areas of some provinces.

“Although USCIRF recommends Vietnam be designated a CPC, we also recognize that the government has demonstrated a willingness to engage on freedom of religion or belief,” said USCIRF Chairman Dr. Daniel Mark, who has traveled to Vietnam on behalf of USCIRF. “The United States must continue to ensure that religious freedom is pursued both privately and publicly at every level of the bilateral relationship so that Vietnam takes positive and lasting steps toward freedom of religion or belief, including releasing religious prisoners of conscience.”