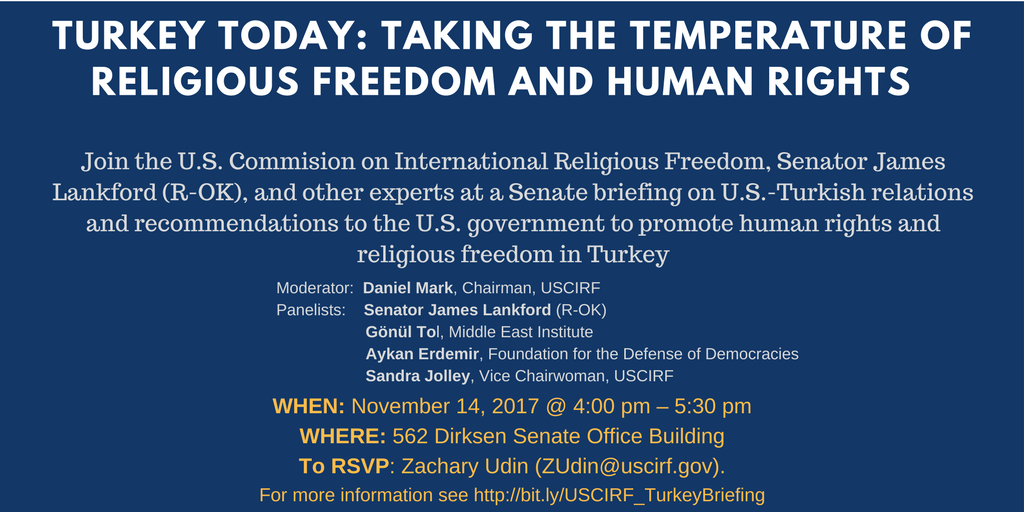 Watch the recording of the TURKEY TODAY Briefing here.

invite your participation in a briefing on

USCIRF, in conjunction with Senator James Lankford, is pleased to invite you to a briefing on TURKEY TODAY: Taking the Temperature of Religious Freedom and Human Rights.

USCIRF has reported on Turkey since 2006 and noted in the 2017 Annual Report that, despite some positive steps towards improving religious freedom conditions, long-standing concerns remain.  Given these concerns, USCIRF placed Turkey on its Tier 2 list of countries. In October, a USCIRF delegation visited Turkey to assess conditions and, during that visit, met with imprisoned American Pastor Andrew Brunson.

In July 2016, the country experienced a surprise attempted coup during which over 260 people died. During the country-wide state of emergency that was declared soon after, tens of thousands of alleged coup supporters were arrested and thousands more were removed from positions in the Turkish military, judiciary, and education system. Human rights advocates and members of religious minority communities were accused of attempting to undermine the Turkish state.  Many still are detained.

During this briefing, panelists will explore U.S.-Turkish relations given the challenging environment, discuss Turkey’s critical role in the region, and focus on recommendations to the U.S. government to promote human rights and religious freedom in Turkey.

This briefing is open to Members of Congress, congressional staff, the interested public and the media. For any inquiries, please contact Isaac Six at USCIRF (202-786-0606 or isix@uscirf.gov) or Sarah Seitz in Senator Lankford’s office (202-224-5754 or Sarah_Seitz@lankford.senate.gov).   To RSVP: please contact Zachary Udin (ZUdin@uscirf.gov).

Watch the video recording of the TURKEY TODAY Briefing here.

Or watch the video recording of the TURKEY TODAY Briefing here.