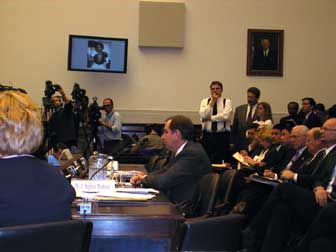 Chairman Royce, Chairperson Ros-Lehtinen, Mr. Payne, and Ms. McKinney: Good afternoon and thank you for this opportunity to testify on behalf of the United States Commission on International Religious Freedom.

In our first annual report issued last May 1, the Commission found that the government of Sudan was the world's most violent abuser of the right to freedom of religion and belief. Religion is a major factor in Sudan's civil war, which has dragged on for some 18 years now. The Sudanese government is committing genocidal atrocities against the civilian population in the south and the Nuba Mountains.

In light of these conditions, the Commission recommended that the Clinton Administration launch a comprehensive program of diplomatic and economic pressure to reverse the religious-freedom and human rights abuses in Sudan. And given the connection between oil development and the Sudanese government's prosecution of the war, we recommended that foreign companies engaged in the development of Sudan's oil and gas fields be prohibited from raising money in U.S. capital markets.

The situation in Sudan has gotten worse in the 10 months since the release of the Commission's report. The government of Sudan continues to commit egregious human rights abuses, including:

-- widespread bombing of civilian and humanitarian targets;
-- abduction and enslavement by government-sponsored militias;
-- withholding food aid to cause starvation as a weapon of war;
-- severe restrictions on religious freedom.

The Clinton Administration did take some steps to address the situation, including a successful diplomatic effort that defeated Sudan's bid for a seat on the United Nations Security Council. It also earmarked aid to communities in southern Sudan and to the political opposition - the National Democratic Alliance. But these actions fell well short of the comprehensive, sustained campaign the Commission believes is required to combat the Sudanese government's abuses.

This civil war has already cost 2 million lives and displaced 4 million people, and there is no significant movement toward peace. Since the Commission's 2000 Annual Report, the Sudanese government has stepped up its deliberate aerial bombing attacks on hospitals, schools, churches, markets, relief-organization compounds, and other clearly marked civilian or humanitarian installations. Organizations tracking these bombings count more than 150 incidents in the year 2000, including several attacks on clearly marked UN and private relief facilities. More than once, for example, the facilities of Samaritan's Purse, run by Franklin Graham, were hit. Now there is evidence the Sudanese government is using more-accurate and more-sophisticated weapons.

The Sudanese government continues to deny access for food-aid distribution, particularly in Western Upper Nile. This threatens the lives of many who are often short of food. In addition to the bombings I have just mentioned, in January of this year government militias attacked and destroyed a compound of the International Committee of the Red Cross in southern Sudan. Just three weeks ago, a militia loyal to the government attacked and looted the aid compound of the Adventist Development and Relief Agency, killing a woman and a 12-year-old girl and taking four African relief workers hostage. (They were released several days later.) In addition, the government has allegedly tolerated the use of food aid for religious purposes - reports from credible sources tell us that UN-provided aid is being distributed on the condition that the hungry person convert to Islam.

Government forces and militias continue to kidnap women and children into slavery. According to UNICEF officials, just this January government-backed militias raided villages in Bahr-al-Ghazal, killing 11 people and abducting 122 women and children. The State Department estimates that between 12,000 and 15,000 women and children remained in captivity at the end of last year. Some children have been forced to convert to Islam.

The connection between oil development and the government's human rights abuses has become increasingly apparent over the past year. The discovery and drilling of reserves in Upper Nile province has led to a government scorched-earth policy to remove civilians from areas around oil installations. The government also reportedly uses airstrips and roads built for oil projects to launch military operations. The State Department reports that oil revenues have allowed the government to buy more military hardware.

Sudan's oil development has attracted significant foreign investment in Sudan. While U.S. sanctions prohibit American companies from investing or doing business in Sudan, they do not prohibit foreign companies from doing so and then issuing securities in U.S. markets or listing their stocks on U.S. exchanges. Two Chinese companies involved in Sudan had initial public offerings (IPOs) of shares in U.S. markets in 2000: China National Petroleum Corporation - through its PetroChina subsidiary - and Sinopec. In addition, companies such as Talisman Energy, Royal Dutch Shell, Lundin Oil, and Total Elf Fina - all involved in Sudan - list shares on the New York Stock Exchange. Some are under public or shareholder pressure to divest their Sudan business interests.

Given these facts, the Commission last week issued an updated set of recommendations to the U.S. administration and Congress. These will be contained in our second Annual May 1 Report, but we released them now because the new Administration is comprehensively reviewing U.S. policy towards Sudan - and because the gravity of the situation there warrants it. These recommendations were adopted unanimously by the Commission, with Commissioner Al-Marayati issuing concurring opinions on Recommendations 3 and 5.

Mr./Madame Chairman, I respectfully request that the Commission's full report, along with my testimony today, be entered into the record.

Towards the goals of implementing the kind of comprehensive, sustained campaign that the Commission feels is indispensable for changing Sudan's human rights and religious-freedom abuses, and of maximizing the use of the presidential "bully pulpit" to raise the awareness and involvement of the American public and the international community, the Commission makes the following recommendations:

-- First, the U.S. government should appoint a nationally prominent individual whose sole task is to work for a peaceful and just settlement of the war and an end to the Sudanese government's religious-freedom and humanitarian abuses. But the U.S. should not appoint an ambassador to Sudan in Khartoum at this time.

-- Second, the U.S. government should continue to increase the amount of its humanitarian assistance to the Sudanese people outside of Operation Lifeline Sudan (OLS) and should press OLS to deliver aid wherever it is needed, especially the Nuba Mountains, with or without the approval of the Sudanese government.

-- Third, the U.S. government should increase its assistance to southern Sudan under the Sudan Transitional Assistance for Rehabilitation (STAR) program and should provide aid to the National Democratic Alliance that would enhance its ability to participate in the peace process.

-- Fifth, the U.S. government should strengthen economic sanctions against Sudan and should urge other countries to do the same. The U.S. should prohibit any foreign company from raising capital or listing its securities in U.S. markets as long as it is engaged in Sudanese oil and gas development. The U.S. government should not permit the import of gum arabic from Sudan to the United States.

-- Sixth, companies that are doing business in Sudan should be required to disclose the nature and extent of that business in connection with their access to U.S. capital markets.

-- Seventh, the U.S. government should intensify its support for the negotiation of a peaceful settlement and for the Declaration of Principles, and make a just and lasting peace a top priority of this administration's global agenda.

-- And finally, the U.S. government should work to increase human rights and media reporting on abuses in Sudan, including supporting the placement of human rights monitors in southern Sudan and among refugees in surrounding countries.

That concludes my prepared remarks. I'll be happy to answer any questions you may have.