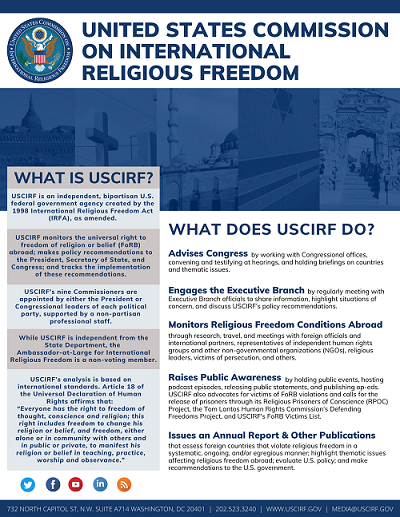 USCIRF monitors the universal right to freedom of religion or belief (FoRB) abroad; makes policy recommendations to the President, Secretary of State, and Congress; and tracks the implementation of these recommendations.

USCIRF's nine Commissioners are appointed by either the President or Congressional leaders of each political party, supported by a non-partisan professional staff.

While USCIRF is independent from the State Department, the Ambassador-at-Large for International Religious Freedom is a non-voting member.

USCIRF’s analysis is based on international standards. Article 18 of the Universal Declaration of Human Rights affirms that:

“Everyone has the right to freedom of thought, conscience and religion; this right includes freedom to change his religion or belief, and freedom, either alone or in community with others and in public or private, to manifest his religion or belief in teaching, practice, worship and observance.”

WHAT IS RELIGIOUS FREEDOM?

Inherent in religious freedom is the right to believe or not believe as one’s conscience leads, and live out one’s beliefs openly, peacefully, and without fear.  Freedom of religion or belief is an expansive right that includes the freedoms of thought, conscience, expression, association, and assembly.  While religious freedom is America’s first freedom, it also is a core human right international law and treaty recognize; a necessary component of U.S. foreign policy and America’s commitment to defending democracy and freedom globally; and a vital element of national security, critical to ensuring a more peaceful, prosperous, and stable world.

WHAT DOES USCIRF DO?