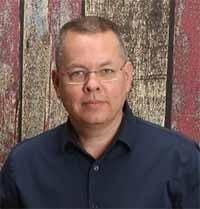 “It is good that Pastor Brunson will have some relief after being held in a Turkish prison for more than 600 days. But it is not enough,” said USCIRF Vice Chair Kristina Arriaga

WASHINGTON, DC -- The U.S. Commission on International Religious Freedom (USCIRF) today welcomed a Turkish court’s decision to place Pastor Andrew Brunson under house arrest. Pastor Brunson is an American citizen and leader of a small Protestant Christian church in Turkey who has been unjustly detained since October 7, 2016 on false charges. USCIRF Vice Chair Kristina Arriaga attended his third hearing in Aliaga, Turkey, on July 18, 2018. USCIRF has condemned the charges against Pastor Brunson and has called for his immediate release.

“This is welcome news,” said Vice Chair Arriaga. “It is good that Pastor Brunson will have some relief after being held in a Turkish prison for more than 600 days. But it is not enough. The Turkish government has deprived this innocent man of his due process rights and liberty for too long, and it must completely release him. If it fails to do so, the Trump Administration and the Congress should respond strongly and swiftly with targeted sanctions against the authorities responsible.”

On October 5, 2017, USCIRF Vice Chair Kristina Arriaga and then USCIRF Vice Chair Sandra Jolley were granted access to Kiriklar Prison in Izmir, Turkey and allowed to visit with Pastor Brunson. They were his first visitors outside of family, legal counsel, and U.S. embassy officials. They described their visit in an opinion editorial for Religion News Service, which can be found here. Vice Chair Arriaga described what she saw at the July 18 hearing in an opinion piece in the Wall Street Journal which can be found here.

In 2018, USCIRF placed Turkey on its Tier 2 list of countries noted for violations of religious freedom and began advocating for Pastor Brunson as a part of its Religious Prisoners of Conscience Project.

The U.S. Commission on International Religious Freedom is an independent, bipartisan U.S. federal government commission, the first of its kind in the world. USCIRF reviews the facts and circumstances of religious freedom violations abroad and makes policy recommendations to the President, the Secretary of State, and Congress. USCIRF Commissioners are appointed by the President and the Congressional leadership of both political parties. To interview a Commissioner, please contact USCIRF at Media@USCIRF.gov or Javier Peña at JPena@USCIRF.gov +1-202-786-0633).