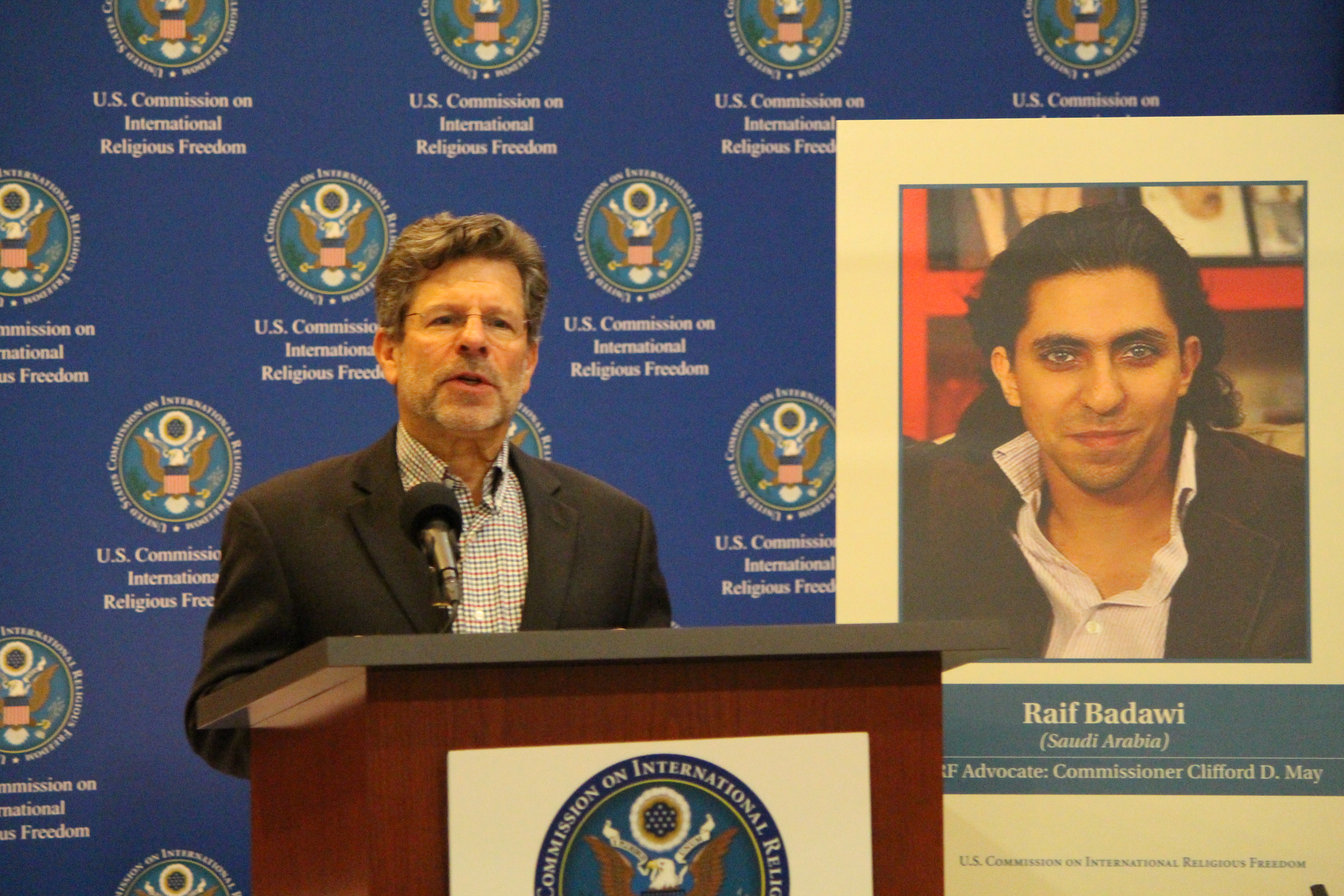 FOR YOUR INFORMATION
July 24, 2017 | Commissioner Clifford D. May
The following op-ed appeared in Deseret News on July 23, 2017

Last year, Saudi Arabia unveiled Saudi Vision 2030, a bold plan to transform the kingdom’s oil-dependent economy to make it much more diversified and durable, no matter how global energy markets change. Vision 2030 makes it clear: to accomplish that would require Saudi Arabia to become “a tolerant country with Islam as its constitution and moderation as its method.” Who can argue with that goal?

But let’s be candid. Saudi Arabia has a long way to go. Since its inception, the U.S. Commission on International Religious Freedom, on which I serve as a commissioner, has recommended that Saudi Arabia be designated as a “Country of Particular Concern” because the government engages in violations of religious freedom that are “systematic, ongoing and egregious.”

The State Department has designated the Kingdom a CPC since 2004 but always has given the Saudis a waiver from the consequences of the CPC designation. Why? Some say the waiver reflects the State Department’s view about what’s in the United States' interest. Without the waiver, the designation would trigger actions that could range from slight to severe.

I traveled to Saudi Arabia with fellow USCIRF commissioners in February and saw firsthand that some progress is being made. For example, the religious police — the mutaween — no longer have the power to make arrests. If they believe someone is violating the country’s religious laws, they can only report that violation to the regular police who then decide whether to take action. Saudi human rights activists with whom USCIRF commissioners met called these “baby steps,” but added that it gives them hope that further progress is possible.

The barriers, however, are substantial. The powerful Saudi religious establishment’s use of the state to enforce its interpretation of Islam is severe and intolerant, and aims to maintain the status quo. Other readings of Islam are either disadvantaged or prohibited outright. Non-Muslims may not worship publicly. Private worship, in homes, for example, is not a right, though authorities do often turn a blind eye to small gatherings of Christians (who are not citizens but only guest workers from such countries as the Philippines and India).

The government also continues to restrict a broad range of other human rights. Women’s rights and women’s participation in society present a complicated picture. Under what’s called the “legal guardianship system,” women must be in the charge of a man — whether he's a father, a brother or even a son. Their second-class “guardianship” status, however, contrasts with women’s increasing participation in broader areas of society. For example, a majority of Saudi college graduates are now women, and the number of female lawyers is growing as is the role they play in the legal system.

Despite such promising trends, Saudi courts continue to prosecute individuals for political dissent, and variations from the state-backed conservative orthodoxy are often regarded as blasphemy or apostasy.

Those imprisoned for such crimes are seen by USCIRF and others as “prisoners of conscience.” One of them is the blogger and activist Raif Badawi. As part of the Commission’s Religious Prisoners of Conscience Project, I have chosen to raise my voice in support of him and advocate on his behalf.

June 17 marked the fifth anniversary of Badawi’s arrest for “insulting Islam.” His “crime” was running a website that encouraged debate on religious and political matters in Saudi Arabia.

Six months after his arrest, he appeared before the Jeddah Criminal Court where he faced additional charges: "setting up a website that undermines general security," "ridiculing Islamic religious figures" and "going beyond the realm of obedience." He also was charged with apostasy. A conviction carries the death sentence under Saudi Arabia’s interpretation of Shari’ah, Islamic law.

On July 29, 2013, Badawi was sentenced to seven years in prison and 600 lashes. Next, an appeals court increased his punishment to 10 years in prison, 1,000 lashes and a large fine.

On Jan. 9, 2015, Badawi was flogged 50 times near a Jeddah mosque in front of hundreds of spectators. This was to be the first of 20 weekly lashings carried out each Friday. Thankfully, intense pressure from the international community, including from USCIRF and a medical doctor’s finding that he could not withstand such treatment for long, halted additional floggings. Should they resume and be fully carried out, his sentence could soon become a death sentence. And his family believes these floggings could resume at any time.

He has not seen his wife, Ensaf Haidar, and their young children — Najwa, Doudi and Miriyam — for more than five years. For their safety, his wife and children fled Saudi Arabia for Canada where they were granted asylum in 2013. Ensaf Haidar has tirelessly advocated for her husband, as have the three children for their father, and as I will do until Badawi is free.

Saudi Vision 2030’s aspirations are laudable. Saudi Arabia should become a tolerant and moderate country, but that means accepting some debate and even dissent. That transformation needs to begin now. Releasing Badawi would represent a meaningful step forward.

Clifford D. May is a commissioner on the U.S. Commission on International Religious Freedom.