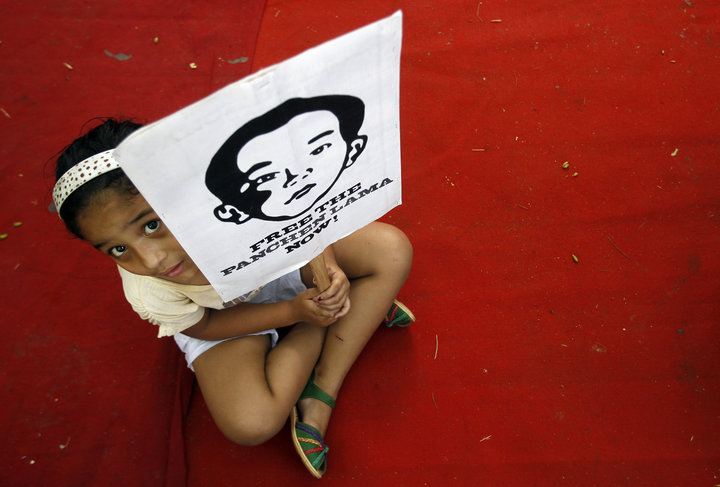 FOR YOUR INFORMATION
October 12, 2017 | Commissioner Tenzin Dorjee and Congressman Jim Mcgovern
The following op-ed appeared in Huffington Post on October 12, 2017

Imagine you are a 6-year-old. Your world is your family, friends and community. One day, people come to your home and reveal that you are very special, a venerable leader of your faith, and that you will serve as a spiritual guide for your people.

Two days later, authorities appear. They force you and your family from your home and take you away.

This is what we know about Gedhun Choekyi Nyima, chosen on May 15, 1995 by the Dalai Lama, the highest position in Tibetan Buddhism, to be the 11th Panchen Lama, filling the second highest position. On May 17, 1995, the Chinese government detained him and his family and announced a few months later that it had selected its own Panchen Lama. In so doing, the government asserted an authority that it does not possess: to name a reincarnated religious leader of Tibetan Buddhism—a particularly ironic action given the state’s official atheism.

We have chosen to advocate for the Panchen Lama and highlight the Chinese government’s laws, policies and practices that led to his disappearance. Our advocacy is part of the congressional Defending Freedoms Project of the Tom Lantos Human Rights Commission, and the Religious Prisoners of Conscience Project of the U.S. Commission on International Religious Freedom (USCIRF).

The Panchen Lama has not been heard from since that day, more than 20 years ago, when he and his family were taken. He now is one of the world’s longest-held prisoners of conscience. Representatives from the U.S. government, the United Nations, civil society organizations and others repeatedly have asked to see him. During a July 2017 Tom Lantos Human Rights Commission hearing on “Tibet: Freedom of Religion,” which highlighted deteriorating conditions in Tibet, we called on the Chinese government to provide authenticated video graphic evidence of the Panchen Lama’s well-being. The Chinese government answers these inquiries with silence, statements that they are protecting him from being “kidnapped by separatists,” or bromides about his “normal, happy life receiving a good education and cultural upbringing,” and desire to “not be disturbed.” Even if true, we want to hear from the Panchen Lama himself, without mediation.

The Panchen Lama’s disappearance is emblematic of the violations of religious freedom that take place in Tibetan areas on a daily basis. While the People’s Republic of China presents itself as a global superpower that respects the rule of law and international standards, nothing could be farther from the truth.

The Chinese government has disappeared many Tibetan Buddhists and imprisoned thousands, many of whose cases have been documented by the Congressional-Executive Commission on China. The government forces some Tibetans into reeducation programs, imposes extensive electronic and physical surveillance, mandates government officials’ presence in monasteries, cancels festivals, restricts travel, and intrusively restricts private religious practice. These restrictions have escalated since President Xi Jinping assumed leadership of the military and the Communist Party in November 2012.

At Larung Gar, one of the world’s largest Tibetan Buddhist institutes, and Yachen Gar, a nearby religious community, the Chinese government has demolished buildings and evicted thousands in an attempt to eviscerate the teachings and study integral to the practice of Tibetan Buddhism. In late August Communist Party and government officials were appointed to manage Larung Gar.

Due to the extensive repression, since 2009 at least 150 Tibetans have self-immolated, one of the few forms of protest many Tibetans believe remains to them given the intense government control that prevents most collective acts of resistance.

Government officials also continually attack the Dalai Lama, seeking to make him a persona non grata worldwide. They accuse him of “blasphemy” and “splittism,” refer to him as a “wolf in monk’s robes,” and, most egregiously, want to exercise complete control over his reincarnation.

We believe that the U.S. government must do more in response to the religious freedom violations the Chinese government has committed against the Tibetan people. To that end, we urge the Congress to pass and President Trump to sign H.R. 1872, the Reciprocal Access to Tibet Act. We also urge the Administration to designate China as a “country of particular concern” (CPC) for its systematic, ongoing, and egregious religious freedom violations, and develop a list of Chinese officials subject to sanctions under the Global Magnitsky Human Rights Accountability Act and the Frank R. Wolf International Religious Freedom Act.

We must not be silent about the Chinese government’s persecution of the Tibetan people. That government has disappeared the Panchen Lama and seeks to make the Tibetan people disappear by repressing their religion, culture, and language. We cannot let this happen on our watch.