USCIRF Launches the Freedom of Religion or Belief Victims List 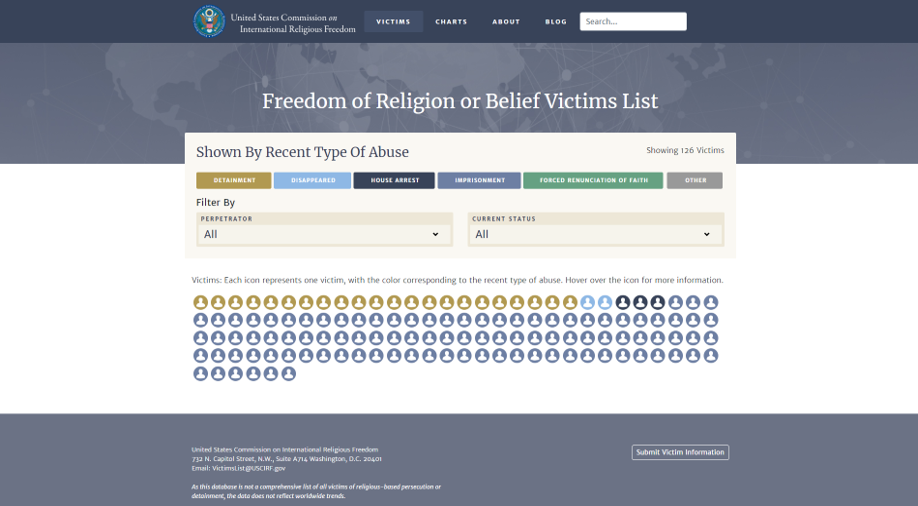 USCIRF Launches the Freedom of Religion or Belief Victims List

"make publicly available to the extent practicable, ... lists of persons [USCIRF] determines are imprisoned or detained, have disappeared, been placed under house arrest, been tortured, or subjected to forced renunciations of faith for their religious activity or religious freedom advocacy…”

The FoRB Victims List was publicly unveiled today at the International Religious Freedom Roundtable on Capitol Hill. Speaking at this event, Chair Perkins said, “We are thrilled to debut the FoRB Victims List. One of our hopes for this project is to work collaboratively to build and maintain a robust FoRB victims database that increases awareness of the grave plight of victims of religious freedom violations.”

“The launch of this database is an exciting development in the Commission’s history. Together, we can make the FoRB Victims List a central pillar of USCIRF’s engagement with the religious freedom advocacy community,” said Vice Chair Manchin.

IRFA stipulates that the FoRB Victims List include those victims from countries that it recommends for Country of Particular Concern – or CPC – designation and entities that it recommends for Entities of Particular Concern – or EPC – designation. The Commission is focusing first on countries recommended for CPC status, but will eventually also include victims targeted by entities that USCIRF has recommended for EPC status. The cases within this database should be viewed as indicative of the violations practiced by the governments or non-state actors, not as exhaustive or representative lists of total victims or a reflection of worldwide trends.

The FoRB Victims List is immediately available to browse and can be found here. Additionally, USCIRF encourages the public to utilize the Victims Intake Form to submit information about victims who should be included. A link to this intake form is on the footer of each page of the database, titled “Submit Victim Information,” or it can be accessed here.