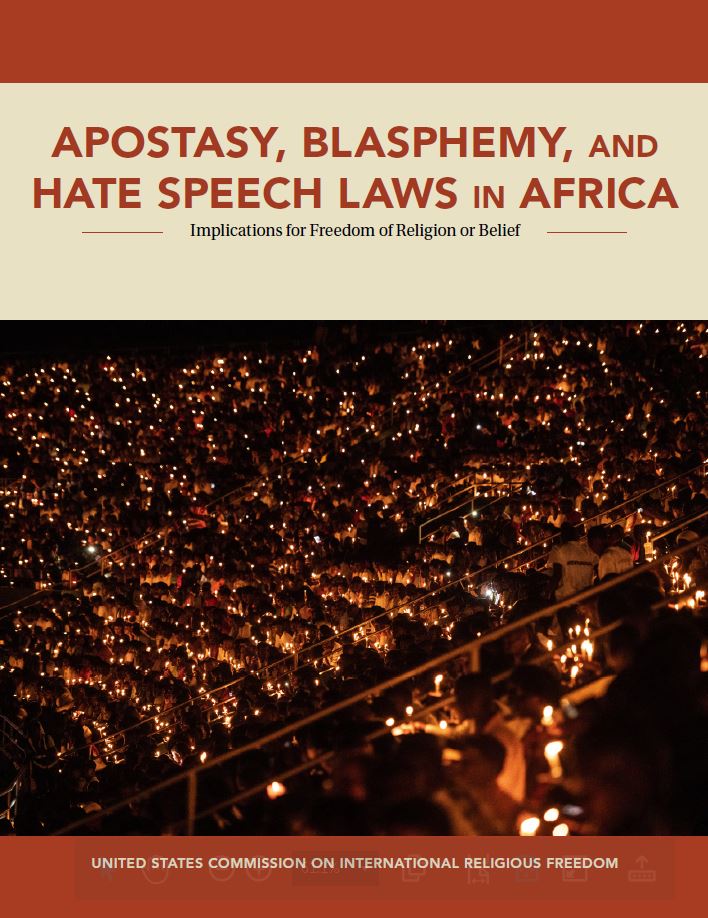 WASHINGTON, DC – The U.S. Commission on International Religious Freedom (USCIRF) today released a report entitled “Apostasy, Blasphemy, and Hate Speech Laws in Africa: Implications for Freedom of Religion or Belief.” This report examines these speech restrictions and their impact on religious freedom across the African continent.

“The freedoms of religion or belief and expression or opinion, enshrined in Articles 18 and 19 of the Universal Declaration of Human Rights respectively, are intricately linked. This report illustrates how essential it is that we work to safeguard both rights when countering discrimination and hate,” said Chair Tony Perkins.

The report details the prevalence of problematic speech laws in more than half of the countries in Africa: at least nine countries maintain apostasy laws; 26 countries have laws against blasphemy; and 29 countries criminalize hate speech. Laws that prohibit blasphemy (the insult of a religion or religious objects or places) and apostasy (the public renunciation of one’s faith) violate international human rights law. Narrow restrictions on hate speech and its most dangerous forms, such as incitement to genocide, are permissible under international law. But, the effects of broad and vague hate speech laws have the potential to negatively impact religious freedom.

“We have seen the dangers of speech laws that fail to protect human rights in Africa – from the misapplication of hate speech laws in South Sudan to the use of the blasphemy law in Mauritania to impose a death sentence on a blogger. We urge the U.S. government to push for the repeal of blasphemy and apostasy laws in Africa, as well as for the assessment and reform of hate speech laws to conform with international standards,” said Vice Chair Gayle Manchin.

USCIRF is holding a public briefing entitled “Silencing Religious Freedom in Africa: The Impact of Speech Restrictions” to release the report on Human Rights Day, Tuesday, December 10 at 9:30 AM at 421 Cannon House Office building.

The U.S. Commission on International Religious Freedom (USCIRF) is an independent, bipartisan federal government entity established by the U.S. Congress to monitor, analyze, and report on threats to religious freedom abroad. USCIRF makes foreign policy recommendations to the President, the Secretary of State, and Congress intended to deter religious persecution and promote freedom of religion and belief. To interview a Commissioner, please contact USCIRF at Media@USCIRF.gov or 202-523-3240.