USCIRF Welcomes the Release of Ayda Expósito, Calls for Release of Other Religious Prisoners of Conscience in Cuba 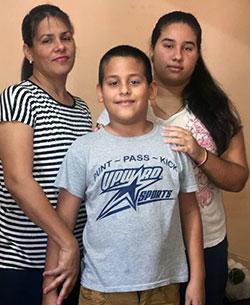 USCIRF Welcomes the Release of Ayda Expósito, Calls for Release of Other Religious Prisoners of Conscience in Cuba

The couple was imprisoned on April 16, 2019 for homeschooling their children based on a concern regarding Cuban schools’ promotion of socialism and atheism. They were later sentenced for crimes including “other acts against the normal development of a minor.” Pastor Rigal remains in prison serving a two-year sentence, along with independent journalist Roberto Jesus Quinones Haces, who was imprisoned for trying to cover the pair’s trial and then sentenced for the crime of “disobedience.”

“While we welcome the release of Expósito and are particularly relieved that she can be reunited with her children, we believe that she should never have been imprisoned in the first place,” said Commissioner Anurima Bhargava. “The charges brought against her and her husband are part of the Cuban government’s harassment, discrimination, and arbitrary detention of individuals simply seeking to practice their religion."

Cuban prisons are overcrowded and frequently lack sanitary conditions, which are dangerous situations amid efforts to contain the coronavirus pandemic. In light of COVID-19, the Secretary General of the Organization of American States, Luis Almargo, called on Cuba to release political prisoners and others detained that have not committed crimes. Quinones has been named one of the most urgent cases threatening press freedom during the coronavirus crisis.

“More than ever during this global pandemic, the Cuban government must release Pastor Rigal and Roberto Jesus Quinones Haces, along with others held in Cuba for their beliefs or advocacy of religious freedom. With the coronavirus spreading on the island, the conditions in Cuban prisons are a ticking time bomb. We implore the Cuban government not to further punish individuals for their most deeply held convictions by keeping them behind bars despite the present danger,” said Commissioner Gary Bauer.

In its 2019 Annual Report, USCIRF listed Cuba as a Tier 2 country for engaging in or tolerating violations of religious freedom that meet at least one of the elements of the “systematic, ongoing, egregious” standard for designation as “country of particular concern,” or CPC, under the International Religious Freedom Act. USCIRF recently released a policy update detailing religious freedom conditions in Cuba during 2019.

The U.S. Commission on International Religious Freedom (USCIRF) is an independent, bipartisan federal government entity established by the U.S. Congress to monitor, analyze, and report on threats to religious freedom abroad. USCIRF makes foreign policy recommendations to the President, the Secretary of State, and Congress intended to deter religious persecution and promote freedom of religion and belief. To interview a Commissioner, please contact USCIRF at Media@USCIRF.gov or Danielle Ashbahian at dashbahian@uscirf.gov.