View this press release in Spanish 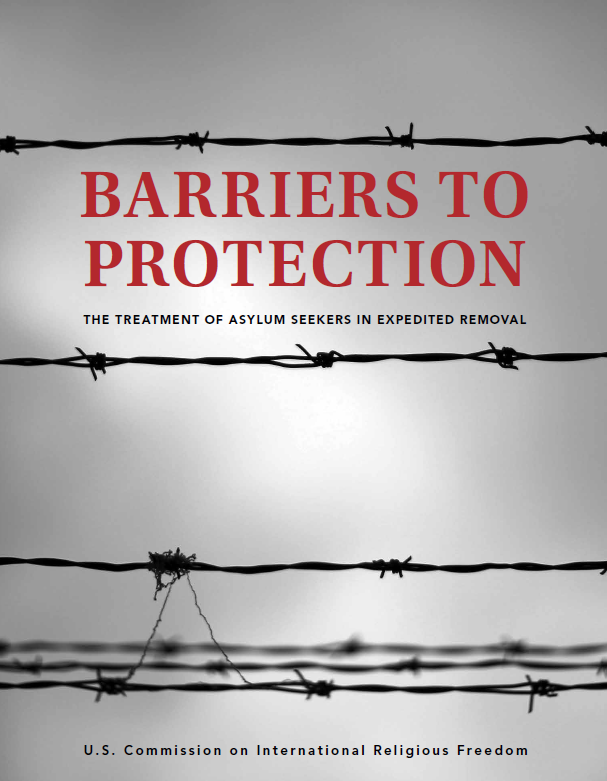 WASHINGTON, D.C. – More than ten years after highlighting serious problems with the U.S. government’s treatment of asylum seekers in Expedited Removal, the U.S. Commission on International Religious Freedom (USCIRF) has found continuing and new concerns. In its newly released report, Barriers to Protection: The Treatment of Asylum Seekers in Expedited Removal, USCIRF documents major problems in processing and detention that start the moment asylum seekers enter the United States.

“How we treat people who come to our borders says a lot about who we are as Americans. Those seeking refuge from persecution deserve to be treated with dignity and should not be confined in prison-like conditions simply for seeking freedom and protection in the United States. It is a travesty that in the ten-plus years since USCIRF first documented serious failures in the Expedited Removal process, the United States has failed to address these issues, with dramatic consequences for men, women, and children,” said USCIRF Chair Thomas J. Reese, S.J.

Expedited Removal is a program through which the U.S. Department of Homeland Security (DHS) can summarily return to their countries of origin certain non-citizens who arrive at U.S. ports of entry or cross the border. Barriers to Protection draws attention to the negative impact, especially on children, of the U.S. Immigration and Customs Enforcement (ICE)’s detention of asylum seekers in institutional settings. Service providers recounted that children in detention experienced depression, post-traumatic stress disorder, developmental regressions, anxiety, and social withdrawal.  Several courts have found that these facilities do not comply with the U.S. government’s own standards for child detention as determined in a 1997 legal settlement, the Flores Agreement.

The report highlights examples of DHS officials’ flawed processing of asylum seekers.  For example, USCIRF investigators were told about a 4-year-old child’s file that indicated he said he had come to the United States to work.  A Bangladeshi asylum seeker told USCIRF he was turned away at a port of entry and told to seek asylum in Mexico.    Of particular concern is that the very same DHS officials tasked with identifying potential asylum seekers at the border are openly skeptical of asylum claims.   For example, a Border Patrol officer questioned the veracity of Chinese Christians’ asylum claims because they could not name the church they attended; the official did not know that many Chinese Christians worship at home. As the report notes, such skepticism could have negative consequences on case processing.

Barriers to Protection also provides troubling evidence that training and quality assurance measures are inadequate and that some Customs and Border Protection (CBP) officers are not following procedures meant to ensure that asylum seekers are not mistakenly returned home. Concerns include failures to ask required questions or properly record answers; the use of interviewing “templates” with standardized, pre-filled responses; files with identical or clearly erroneous answers; and interviewing officers rejecting fear claims or failing to refer asylum seekers to trained asylum officers who are the ones mandated to determine “credible fear.”  USCIRF also found that many asylum seekers do not understand the Expedited Removal process and their rights and responsibilities within it.

The report’s recommendations include that DHS should: appoint a high-ranking official with sufficient authority and resources to carry out the reforms necessary to ensure that asylum seekers are protected in Expedited Removal and oversee the implementation of these reforms; and have the DHS Office of Inspector General audit the Expedited Removal process for compliance with laws and policies on the protection of asylum seekers.

Barriers to Protection follows up on USCIRF’s ground-breaking 2005 Report on Asylum Seekers in Expedited Removal, which included many recommendations that DHS has not implemented.   The 2005 Report on Asylum Seekers in Expedited Removal was authorized by the International Religious Freedom Act of 1998. It found inappropriate prison-like detention conditions and serious processing flaws placing asylum seekers at risk of return to countries where they could face persecution.  To address these problems, USCIRF made a series of recommendations designed both to help protect U.S. borders and ensure the fair and humane treatment of bona fide asylum seekers.

USCIRF Commissioners are available for interviews in English and Spanish.  Please contact media@uscirf.gov.