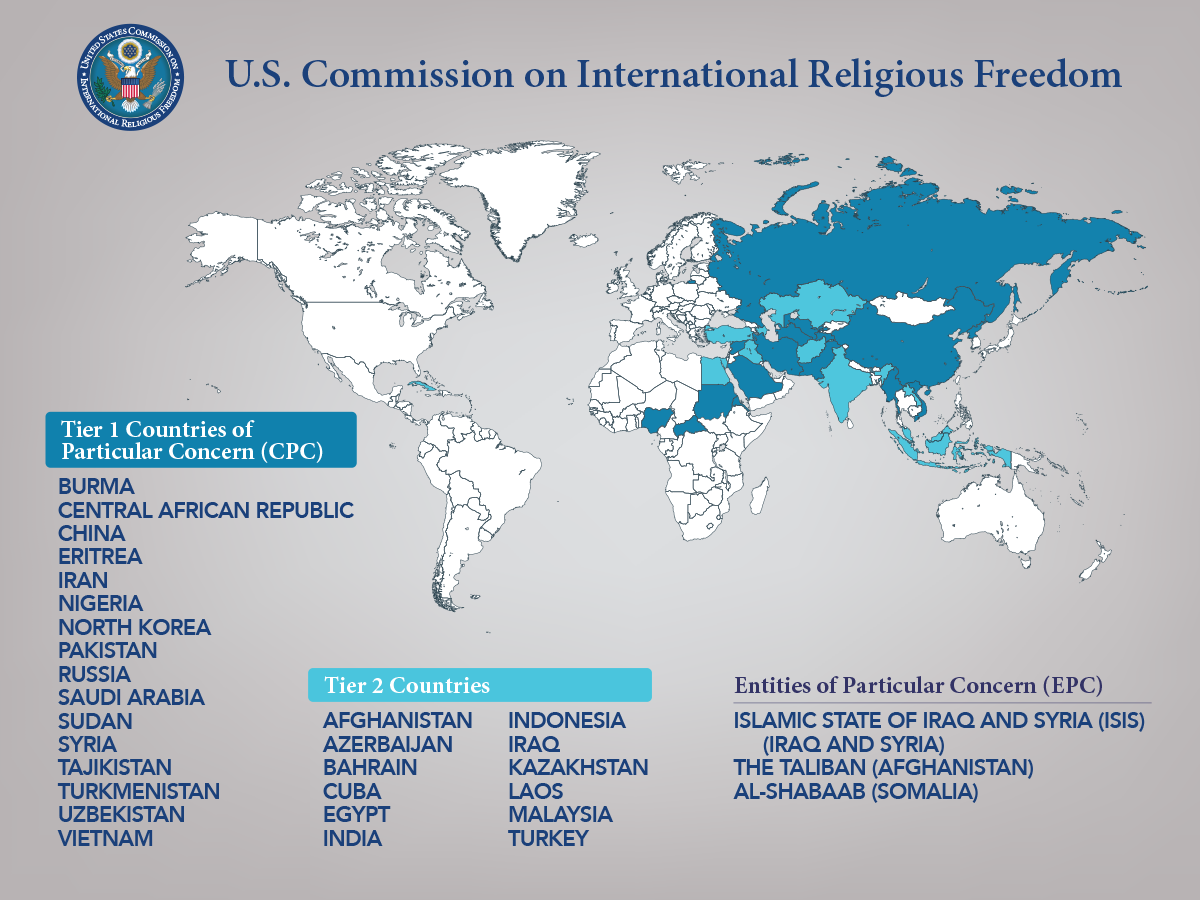 USCIRF’s Chairman Daniel Mark said that “The designation of these countries is a key step in ensuring continued U.S. engagement in support of international religious freedom.  Although USCIRF agrees with the 10 countries on the State Department’s list, it does not go far enough.  Secretary Tillerson should have also designated the Central African Republic, Nigeria, Pakistan, Russia, Syria, and Vietnam.”

The State Department also, for the first time, announced its “Special Watch List” -- a new category created by the Frank R. Wolf International Religious Freedom Act of 2016.  The Special Watch List is for countries that engage in or tolerate severe violations of religious freedom but may not rise to the level of CPC.  The department placed only Pakistan on this list.

Chairman Mark said that “Pakistan continues to harass its religious minorities, has state-sanctioned discrimination against groups such as the Ahmadis, and tolerates extra-judicial violence in the guise of opposing blasphemy.  As USCIRF has said for many years, Pakistan should be designated by the State Department as a CPC. Given the strong stance that President Trump has taken on Pakistan recently, the failure to designate Pakistan as a CPC this year comes as a surprise and disappointment.”

USCIRF commends Secretary of State Rex Tillerson for the excellent statement he made accompanying the August release of the State Department’s International Religious Freedom Report. There, he stated that religious freedom is a “core American value…and universal human right,” commenting further that it is a “human rights priority” for the Trump Administration.  USCIRF was highly encouraged by his words and urges the Secretary of State to make additional CPC designations consistent with that bold and forceful statement.

The Frank Wolf Act also required designations for non-state actors engaged in particularly severe religious freedom violations as “entities of particular concern” (EPCs).  In April 2017, USCIRF recommended that the Administration designate the following entities as EPCs: the Islamic State of Iraq and Syria (ISIS) in Iraq and Syria; the Taliban in Afghanistan; and al-Shabaab in Somalia. The Administration did not make its EPC designations at this time, but USCIRF looks forward to working with the White House and the State Department on expeditiously identifying EPCs and the tools to use against them.

[1/11/18:  Read the official designations in the Federal Register here.]