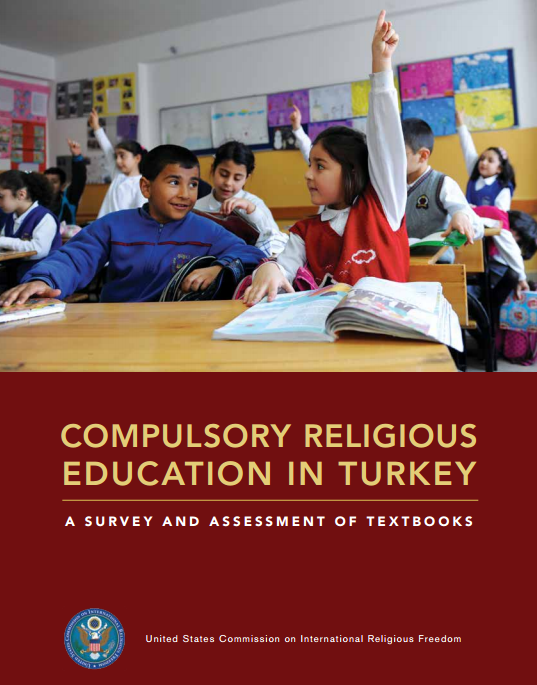 WASHINGTON, D.C – A new study of textbooks used in Turkey’s compulsory “Religious Culture and Moral Knowledge” class found both improvements and issues of concern. The U.S. Commission on International Religious Freedom (USCIRF) sponsored this study, which was conducted by Ziya Meral, a Turkish expert and 2010 USCIRF Crapa Fellow.

“The current Turkish textbooks are a clear improvement over earlier textbooks.  They contain new sections on Alevi traditions and passages on the importance of religious freedom, and omit derogatory statements about non-Sunni Muslim religions. However, these textbooks also contain passages we fear could encourage intolerance toward, and reinforce negative stereotypes about, religious minorities and non-believers,” said USCIRF Chairman Robert P. George. “A country’s education system, including its textbooks, should promote religious tolerance.  Such tolerance is critical to the social fabric of a country, and can provide a bulwark against extremist ideologies, sectarianism, discrimination, and stereotypes.”

This study, “Compulsory Religious Education in Turkey: A Survey and Assessment of Textbooks,” examined all nine textbooks used in Turkey’s compulsory “Religious Culture and Moral Knowledge” class.  This class is taught to public school students from the fourth through 12th grades. The study found positive passages on religion and science, religion and rationality, good citizenship, religious freedom, and the origins of differences in Islamic thought.  However, the study also found that the textbooks had superficial, limited, and misleading information about religions other than Islam, including Judaism, Christianity, Hinduism, and Buddhism, and linked atheism with the concept of Satanism.

The study made several recommendations, including that the Turkish government:

USCIRF long has monitored the status of the freedom of religion or belief in Turkey. Among other concerns, USCIRF received reports from religious minority communities that the textbooks required in the “Religious Culture and Moral Knowledge” class were problematic. USCIRF Commissioners discussed concerns about the textbooks with the Turkish Ministry of Education during a February 2014 trip. The Ministry acknowledged receiving similar reports, but noted that they had revised the textbooks in 2011. The Ministry shared the revised textbooks with USCIRF for its review and they were used for this study.

USCIRF placed Turkey on its Tier 2 list in its 2015 Annual Report. Tier 2 countries are those countries where the violations engaged in or tolerated by the government are serious and are characterized by at least one of the elements of the "systematic, ongoing, and egregious’ standard” of IRFA.

To interview a USCIRF Commissioner, please contact Travis Horne at thorne@uscirf.gov or 202-786-0615.