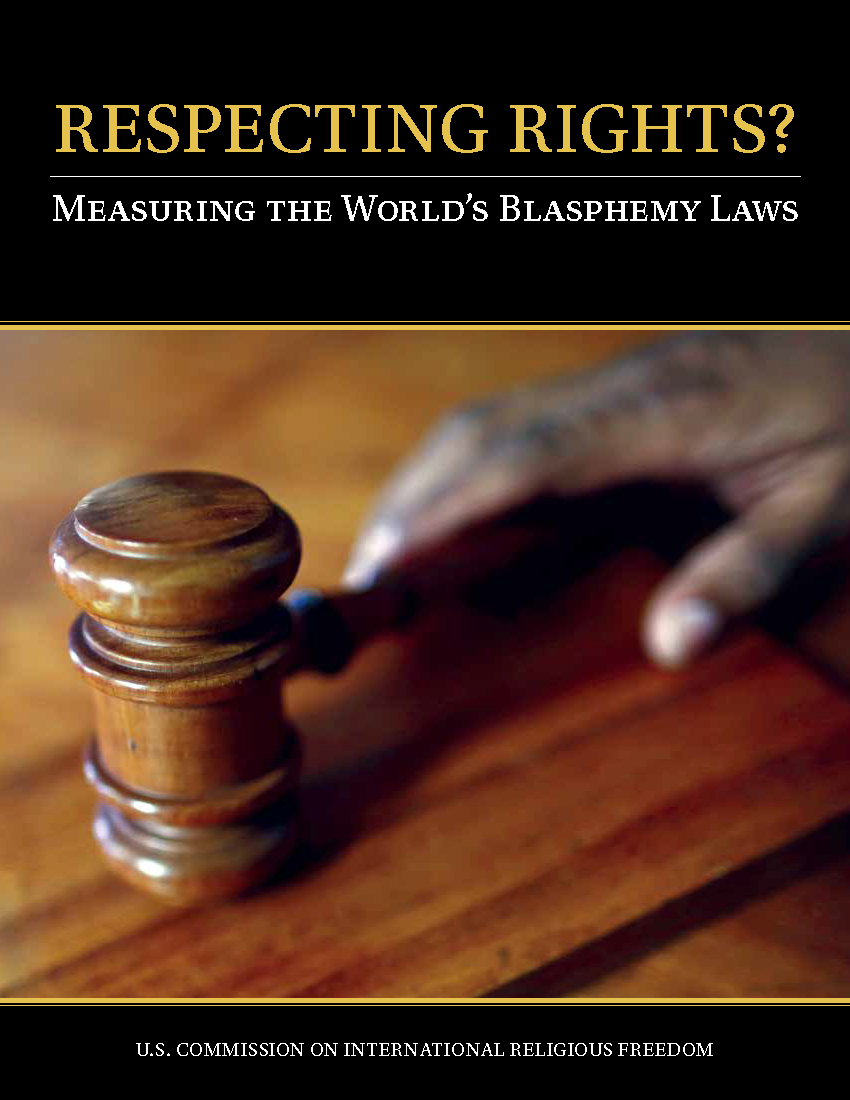 WASHINGTON, DC – The U.S. Commission on International Religious Freedom (USCIRF) has released a report that shows how blasphemy laws around the world fall short of international human rights benchmarks.  “Respecting Rights? Measuring the World’s Blasphemy Laws” catalogs the offending laws found in a wide range of countries. In some countries, blasphemy laws are enforced weakly, if at all, yet such laws, “in both theory and practice, harm individuals and societies.” The report details laws spanning the globe from countries such as Canada and Switzerland to Iran and Indonesia with penalties ranging from fines to death. Surprisingly, more than one-third of the world’s nations have blasphemy laws today.

“Religious freedom includes the right to express a full range of thoughts and beliefs, including those that others might find blasphemous,” noted USCIRF Chairman Daniel Mark. “Advocates for blasphemy laws may argue that they are needed in order to protect religious freedom, but these laws do no such thing. Blasphemy laws are wrong in principle, and they often invite abuse and lead to assaults, murders, and mob attacks. Wherever they exist, they should be repealed.”

The report compared the text of blasphemy laws against such indicators as freedom of expression, freedom of religion or belief, vagueness of the law, severity of penalty, discrimination against groups, and state religion protections. Most laws in the study failed to protect freedom of expression, were vaguely worded, and carried unduly harsh penalties for violators.

In all five of the worst-scoring countries (Iran, Pakistan, Yemen, Somalia, and Qatar), the blasphemy laws aim to protect the state religion of Islam in a way that impermissibly discriminates among different groups. When societies wish to defend people of faith from speech that offends them, private citizens must act, not the government, and they must act peacefully, never with violence. In such cases, solidarity across faiths can be a powerful tool for promoting tolerance and mutual respect.

“Though implementation varies, countries from Switzerland to Sudan persist in outlawing expression of views deemed ‘blasphemous’,” said Chairman Mark. “Some countries, including Canada, have such laws but do not actively enforce them.  We call upon those countries to set an example for the others and repeal their blasphemy laws. And we call upon all countries to repeal any such laws and to free those detained or convicted for blasphemy.”