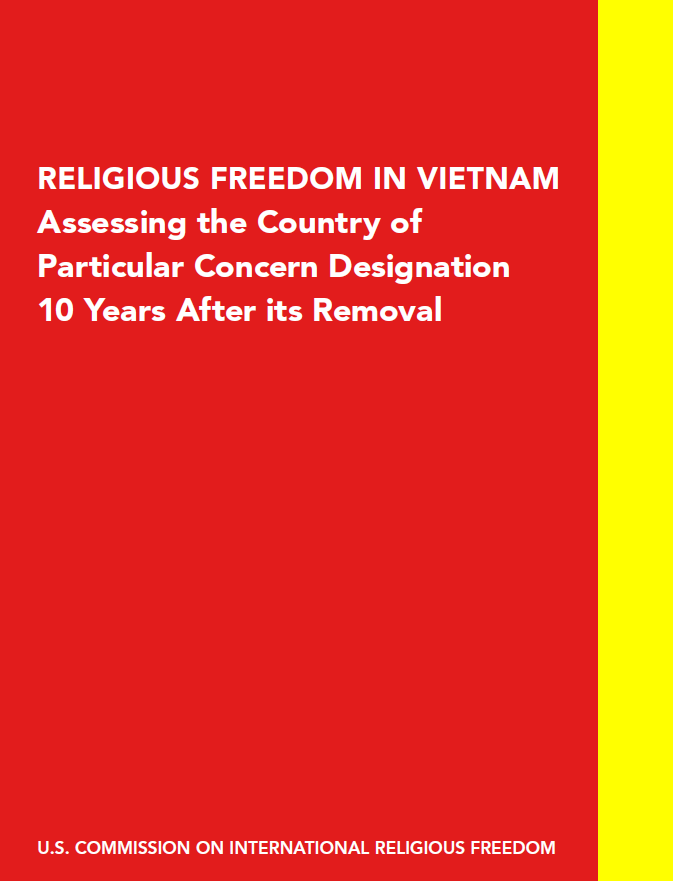 Because of its “systematic, ongoing, and egregious” violations of religious freedom, Vietnam had been designated a “country of particular concern” (or CPC) by the State Department from 2004 until 2006, when, as a result of U.S. diplomatic negotiations, Vietnam promised to improve religious freedom.

This new report examines the history and efficacy of Vietnam’s CPC designation and the implication on religious freedom in Vietnam 10 years after the State Department removed Vietnam as a “country of particular concern.”

“Ten years after the State Department’s removal of Vietnam as a CPC, religious freedom conditions in the country are at a pivotal moment.  While these conditions have improved in some instances, severe religious violations continue that are inconsistent with international standards,” said USCIRF Chair Thomas J. Reese, S.J. “Although the Vietnamese government sought to address these concerns in the recently passed law on religion and belief, this measure is imperfect and disadvantages many religious communities. If Vietnam does not implement religious freedom reforms that are consistent with international standards, USCIRF will continue to call for its designation as a country of particular concern.”

Religious freedom conditions in many parts of Vietnam continue to deteriorate in some areas, notwithstanding that many individuals and communities freely practice their faith. In some areas, local authorities harass and discriminate against religious organizations that the government does not recognize. In addition, religious groups across Vietnam fear that the government will evict them from or demolish their properties. USCIRF has recommended CPC designation for Vietnam every year since 2002.

To view the report in Vietnamese, please click here. For more information on religious freedom conditions in Vietnam, please see USCIRF’s Vietnam chapter in the 2016 Annual Report (in English and Vietnamese), and USCIRF’s recent press release VIETNAM: At a Crossroads, 10 Years after CPC Designation Removed