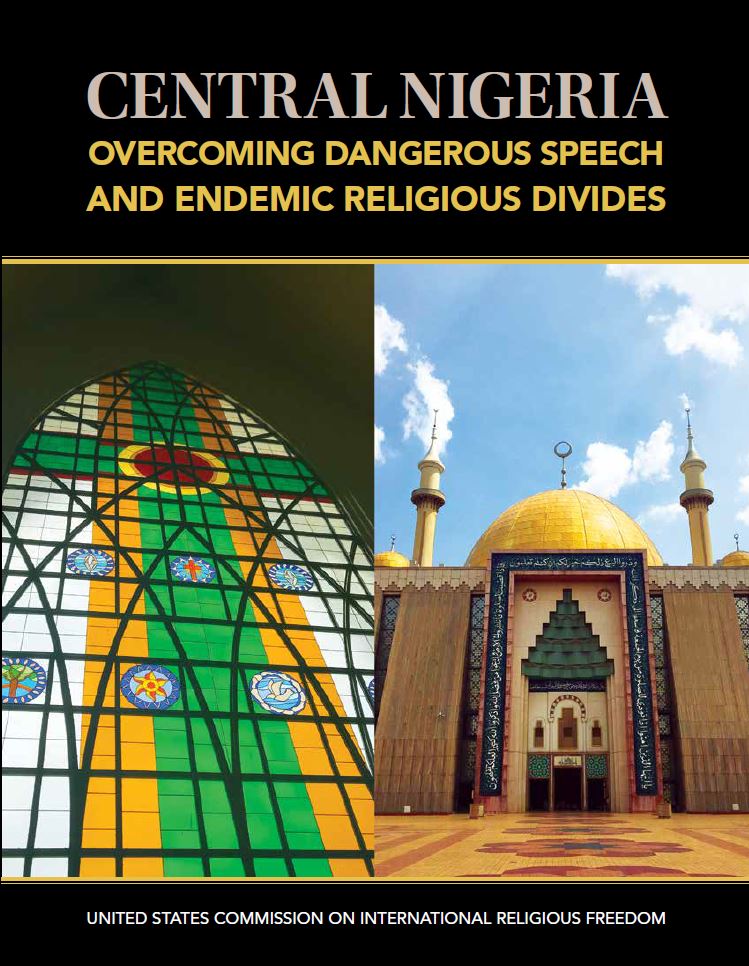 The full report may be found here.
Summary of Findings

In Nigeria, a range of state and societal violations have adversely impacted religious freedom conditions in the country. As a result, since 2009, USCIRF has recommended the U.S. Department of State designate Nigeria as a “country of particular concern,” or CPC. Some of the most egregious are the denials of the right to life, liberty, and the security of people on the basis of religion or belief. Divides between religious communities and the spread of dangerous speech that incites further violence often prompt or escalate these violations. The Nigerian government has yet to find sustainable solutions to perennial conflict and religious polarization. In addition, the terrorist group Boko Haram has waged war in Nigeria for 10 years to eliminate religious freedom and impose an absolute religious authority in the northeast. State security forces, too, have arrested, detained, and killed individuals over differences of religion or belief. Moreover, the longstanding problem of sectarian conflict around ethno-religious divides, resources, and property and citizenship rights between citizens in the Middle Belt region of the country escalated in 2018.

Dangerous speech and polarizing narratives around religion have fueled violence, discrimination, and segregation between Muslims and Christians for decades, particularly in central Nigeria. Some religious and political leaders have warned that national and state elections in February and March 2019 could be a flashpoint for further violence along ethnic and religious lines, in part due to polarization and disinformation, voter suppression and intimidation, and other threats to a peaceful process.

A number of religious leaders, non-governmental organizations, and government actors have proposed a range of solutions and made attempts to repair deeply entrenched religious divisions, such as making statements condemning hate speech or participating in interfaith fora, with varied success. The United States has also supported efforts to improve peace and security for Nigerian citizens to freely manifest their religion or belief. Towards that end, the U.S. Commission on International Religious Freedom recommends that the United States increase its efforts to creatively and more effectively decrease religious discord, dangerous speech, and violence in the Middle Belt.

The U.S. government should utilize the tools available under the International Religious Freedom Act, and enter into a binding agreement with the Nigerian government on commitments to improve religious freedom. Commitments could include enhancing programs to counter hate speech and incitement to violence based on religious identity; supporting the training of police and military officers on human rights standards and religious tolerance; and developing tailored conflict prevention mechanisms at the local, state, and federal levels.