Connecting the Dots: Education and Religious Discrimination in Pakistan, 2011 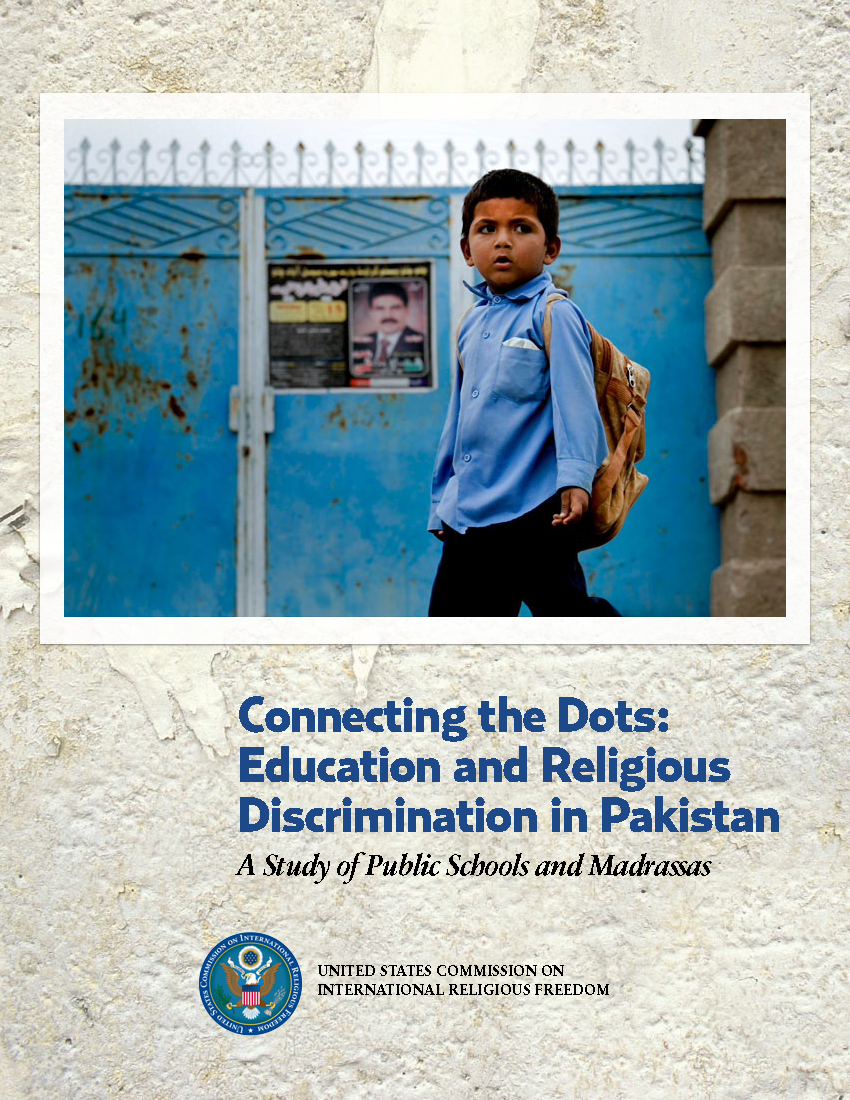 Pakistanis undergoing incredible stress in its capacity to govern. Relief efforts in response to the floods of 2010 and 2011 alone seem capable of overwhelming all other government priorities, as do the constant military campaigns and the deadly effects of ongoing terrorist attacks. The enormous investment in its armed forces, which has consumed much of Pakistan’s GDP since its inception, has diverted vital resources from education, and the situation is only worsening with the need to deal with the rampant insecurities currently confronting the country. In the midst of this turmoil, and with an administration that faces strong political and religious opposition, the Pakistani government has nevertheless put forward recommendations for education reforms, building on efforts begun in 2006 which included revisions to the national curricula. With an eye to increasing the protection and social inclusion of religious minorities, these reforms would soften the strong Islamization of the curricula and textbooks that began in the late 1970s under General Zia-Ul Haq, who stated:

“The highest priority would be given to the revision of the curricula with a view to reorganizing the entire content around Islamic thought and giving education an ideological orientation so that Islamic ideology permeates the thinking of the younger generation and helps them with the necessary conviction and ability to refashion society according to Islamic tenets.”

The reforms have leaned on the 22nd article of the Constitution of 1973, which codifies the rights of religious minorities in education:

“(1) No person attending any educational institution shall be required to receive religious instruction, or take part in any religious ceremony, or attend religious worship, if such instruction, ceremony or worship relates to a religion other than his own.”

Despite these efforts, in the nearly six years since the revised curricular guidelines were created, textbooks comprehensively incorporating the revisions prescribed by these 2006 guidelines have not been created. The existing textbooks have been reprinted since 2006 with only minor adjustments, but, as demonstrated in this study, have not addressed much of the problematic content.

The challenges to Pakistan’s education system will require enormous efforts to overcome. In 2009, Pakistan committed only 2.69% of its GDP to education.2 Pakistan’s prominent Dawn newspaper stated in a 2011 article that “50 percent [of school age students] cannot read a sentence.” On the UNDP World Development Report Education Index, Pakistan ranks 141st of 182 ranked countries. Illiteracy and attendance compare unfavorably to similar countries, with a serious gap in gender representation. Literacy was just over 50%, with less than 50% literacy for females. In such an environment, the capacity for teachers to have the appropriate training, texts and tools to convey basic ideas of religious tolerance faces a serious uphill battle.

The primary objective of the current study was to analyze the impact of textbooks and teaching practices on the attitudes of students towards religious minorities. Under a grant from the U.S. Commission on International Religious Freedom (USCIRF), the research conducted by the International Center for Religion & Diplomacy in partnership with the Pakistan-based Sustainable Development Policy Institute (SDPI) uncovered a wide range of perceptions among teachers and students on the rights, practices, and character of religious minorities. It was unsurprising to find a strong correlation between Pakistani and Islamic identity, considering the religious make-up and strength of Islamic practice in the country. However, the attitudes toward religious minorities are decidedly mixed, with clear demonstrations of tolerance, understanding and acceptance in both public schools and religious schools (madrassas) on the one hand and equally clear expressions of bigotry, ignorance, and hostility in both on the other.

There are many public school students and teachers who advocate respect for religious minorities, but a large portion do not understand minority citizenship rights and are wary about them ever holding public office. A strong sentiment of antagonism was expressed across the board toward the enemies of Islam, but there is widespread confusion about who constitutes an enemy by virtue of their non-Muslim or foreign status. Similarly, a great deal of the anger expressed toward religious minorities often stems from a feeling that they do not respect Islam and Muslims.

Although this chaos of opinion creates challenges for the full social inclusion of religious minorities, it also provides certain opportunities. A large percentage of public school teachers teach their students to be tolerant of faiths other than the dominant Sunni Islam, with much of that tolerance driven by a desire to inspire conversions to Islam (much like the Christian concept of “witnessing by example”). At the same time, while largely resistant to non-Muslims and their role in society, madrassa teachers and students were aware of Qur’anic passages encouraging them to treat non‑Muslims with kindness and understanding.