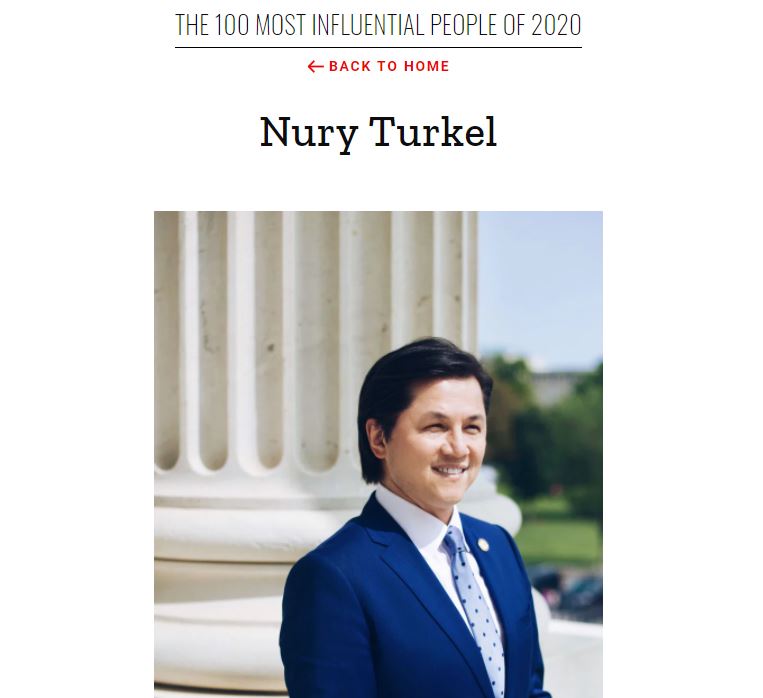 Washington, DC – The United States Commission on International Religious Freedom (USCIRF) congratulated Commissioner Nury Turkel who was named one of the 2020 TIME100, which is TIME magazine’s annual list of the 100 most influential people in the world. Commissioner Turkel was appointed to USCIRF in May 2020 by Speaker of the House of Representatives Nancy Pelosi.

“Nury Turkel, the first Uyghur-American Commissioner to serve at USCIRF, has been an exemplary colleague who fights diligently on behalf of minorities persecuted because of their beliefs,” said USCIRF Chair Gayle Manchin. “Commissioner Turkel has himself been subjected to hardships based on his religion as he was born in a re-education camp at the height of the Cultural Revolution in China and spent the first several months of his life in captivity. He has overcome so much and is very deserving of this recognition on TIME’s annual TIME100 List.”

As the first U.S.-educated Uyghur attorney, Commissioner Turkel has worked tirelessly over the years to give back to the community, building up the Uyghur human rights movement, assisting hundreds of people win asylum in the United States, addressing countless policy forums and legislative hearings, and bringing the plight of Uyghur people to the world’s attention, despite China’s best efforts to cover up its atrocities.

“The TIME100 List rightfully included Commissioner Nury Turkel for his insight and knowledge, especially given his experience and demonstrated commitment to advocating for religious freedom,” said USCIRF Vice Chair Tony Perkins. “His advocacy work has shed light on the plight of Uyghur Muslims in China and elsewhere, and has led to policy changes designed to counter the Communist Party’s genocidal actions against the Uyghur people.”

The TIME100 list, now in its 17th year, recognizes the activism, innovation and achievement of the world¹s most influential individuals. The full list and related tributes appear in the October 5, 2020 issue of TIME, accessible on September 25.

In its 2020 Annual Report, USCIRF called upon the U.S. government to use its authority under the Global Magnitsky Human Rights Accountability Act and the International Religious Freedom Act to impose targeted sanctions on Chinese officials responsible for severe religious freedom violations against Uyghur Muslims, Tibetan Buddhists, Christians, and Falun Gong practitioners.

The U.S. Commission on International Religious Freedom (USCIRF) is an independent, bipartisan federal government entity established by the U.S. Congress to monitor, analyze, and report on threats to religious freedom abroad. USCIRF makes foreign policy recommendations to the President, the Secretary of State, and Congress intended to deter religious persecution and promote freedom of religion and belief. To interview a Commissioner, please contact USCIRF at media@uscirf.gov.