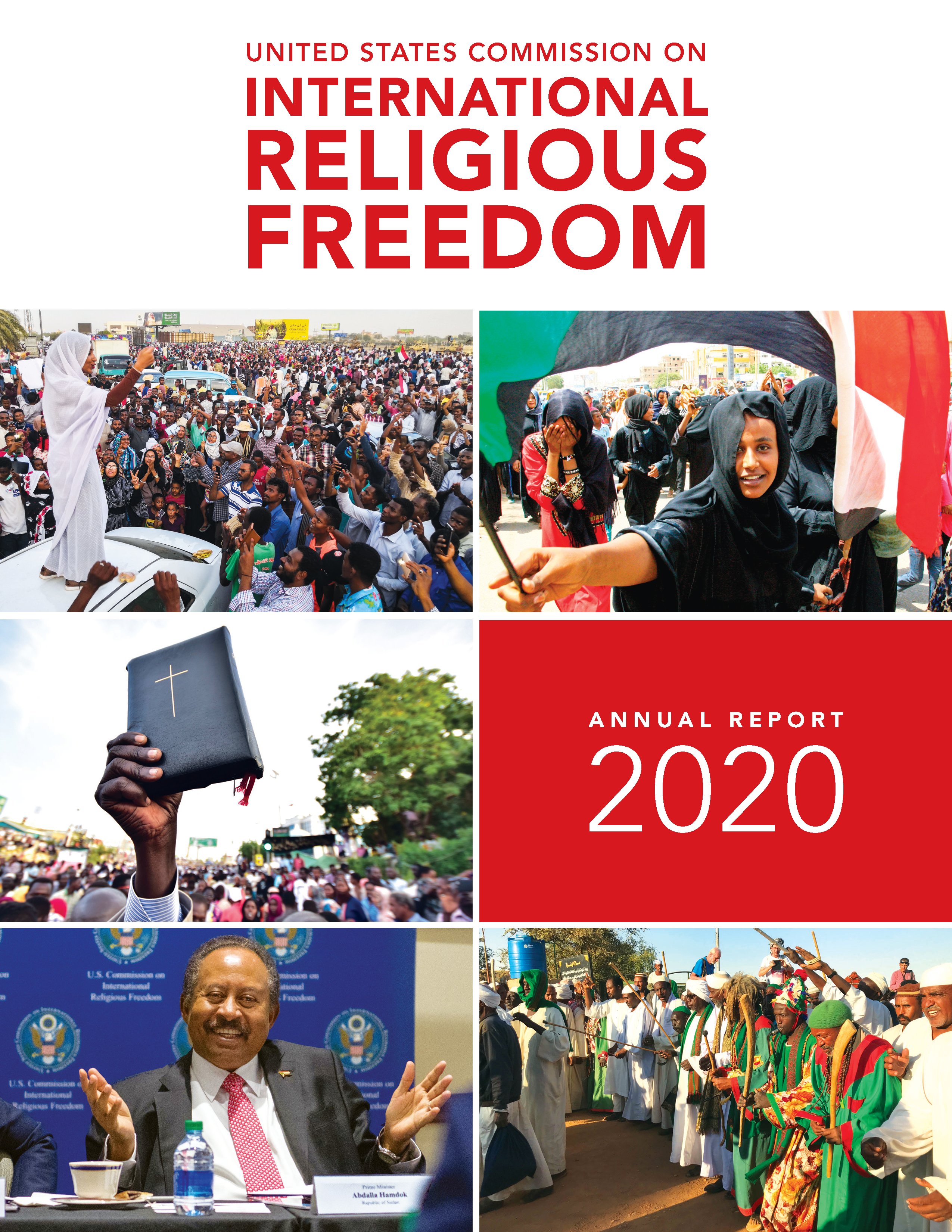 Finds Both Progress and Backsliding in Religious Freedom Conditions

Washington, D.C. – The United States Commission on International Religious Freedom (USCIRF) today released its 2020 Annual Report, documenting significant developments during 2019, including remarkable progress in Sudan and a sharp downward turn in India, and making recommendations to enhance the U.S. government’s promotion of freedom of religion or belief abroad in 2020.

“We are encouraged by the positive steps some governments took in 2019 – particularly two that engaged closely with USCIRF – to establish a safer environment for freedom of religion or belief,” USCIRF Chair Tony Perkins said. “Sudan stands out, demonstrating that new leadership with the will to change can quickly bring tangible improvements. Uzbekistan also made important progress in 2019 toward fulfilling the commitments it made to allow religious groups greater freedom. Though other countries deteriorated, particularly India, we see international religious freedom on an upward trajectory overall.”

USCIRF’s independence and bipartisanship enables it to unflinchingly identify threats to religious freedom around the world. In the 2020 Annual Report, USCIRF recommends 14 countries to the State Department for designation as “countries of particular concern” (CPCs) because their governments engage in or tolerate “systematic, ongoing, egregious violations.” These include nine that the State Department designated as CPCs in December 2019—Burma, China, Eritrea, Iran, North Korea, Pakistan, Saudi Arabia, Tajikistan, and Turkmenistan—as well as five others—India, Nigeria, Russia, Syria, and Vietnam.

Instead of using its own “Tier 2” category, as in past reports, the 2020 Annual Report also recommends 15 countries for placement on the State Department’s Special Watch List (SWL) for severe violations. These include four that the State Department placed on that list in December 2019—Cuba, Nicaragua, Sudan, and Uzbekistan—as well as 11 others—Afghanistan, Algeria, Azerbaijan, Bahrain, Central African Republic (CAR), Egypt, Indonesia, Iraq, Kazakhstan, Malaysia, and Turkey. USCIRF had recommended Sudan, Uzbekistan, and CAR for CPC designation in its 2019 Annual Report; the SWL recommendations this year are based on improved conditions in those countries.

The 2020 Annual Report further recommends to the State Department six non-state actors for designation as “entities of particular concern” (EPCs) for systematic, ongoing, egregious violations. These consist of five groups that the State Department designated in December 2019—al-Shabaab in Somalia, Boko Haram in Nigeria, the Houthis in Yemen, Islamic State in Khorasan Province (ISKP) in Afghanistan, and the Taliban in Afghanistan—plus one other—Hay’at Tahrir al-Sham (HTS) in Syria.

“We commend the Administration for continuing to prioritize international religious freedom in 2019, including dedicating a significant amount of U.S. funding to protect places of worship and religious sites globally, a key recommendation in USCIRF’s 2019 Annual Report. We were also encouraged that in early 2020, the Administration established for the first time a senior staff position at the White House focused solely on international religious freedom, a long-standing USCIRF recommendation,” USCIRF Vice Chair Gayle Manchin stated. “While we welcome these efforts, we also urge the Administration to discontinue the repeated imposition of preexisting sanctions or waivers for CPC-designated countries, and instead, take a unique action for each country to provide accountability for religious freedom abuses.”

In addition to chapters with key findings and U.S. policy recommendations for these 29 countries, the Annual Report describes and assesses U.S. international religious freedom policy overall. The report also includes a new section highlighting key developments and trends around the world in 2019, including in countries not recommended for CPC designation or SWL placement. Examples include the Chinese government’s harassment of human rights advocates outside its borders; the adoption of new blasphemy laws in Brunei and Singapore; increased anti-Semitism in Europe, and a spike in attacks on places of worship or holy sites.

The U.S. Commission on International Religious Freedom (USCIRF) is an independent, bipartisan federal government entity established by the U.S. Congress to monitor, analyze and report on threats to religious freedom abroad. USCIRF makes foreign policy recommendations to the President, the Secretary of State and Congress intended to deter religious persecution and promote freedom of religion and belief. To interview a Commissioner, please contact USCIRF at Media@USCIRF.gov or Danielle Ashbahian at dashbahian@uscirf.gov or +1-202-702-2778.